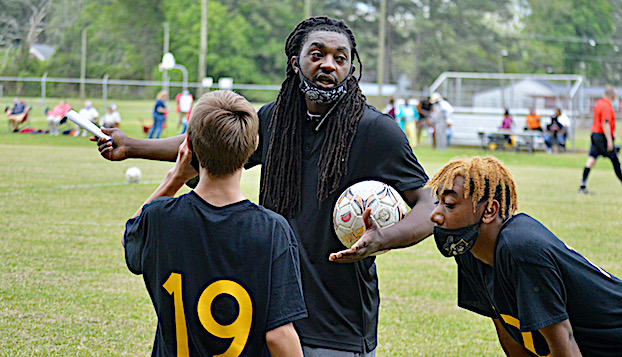 AURORA — Running is a given in soccer. Kinesiology is the study of how humans move. Add a coach with an interest in the former and a degree in the latter and S.W. Snowden Elementary school principal Debra Windley provided the perfect outlet-the school’s first ever soccer team.

11 girls and four boys make up the inaugural Trojans squad, with only two eighth graders, meaning most of the group will return next year to keep the program going.

The Trojans have volleyball and boys and girls basketball, but nothing in the spring since a track team disbanded a few years ago.

“I knew DeMarquis was the perfect fit when I interviewed him,” Windley said. “We started talking about a spring sport and he mentioned soccer, so here we are.”

Howell was a football and track standout at New Bern High School, where he was part of the Bears 2007 state championship team. He graduated in 2009 and went on to play both sports at Livingstone College in Salisbury, N.C., then earned his Master’s in Kinesiology from Alabama A&M in Huntsville. After a year of working for the local Boys & Girls Club, he decided to come home.

“I was ready to give back to the area that has given me so much,” Howell said. “I’ve really enjoyed getting to know the kids here at Snowden and this season has been a lot of fun so far.”

Howell played soccer in middle school, but football and track took precedence in high school. He’s relied on old friends and an area coach to get up to speed quickly.

“Coach (Jay) Petty at Southside has been a huge help,” Howell said. “He’s shown me how to get organized and helped with training methods. I’ve been around the sport for a while and know how to communicate with kids, so it hasn’t been a difficult transition at all.”

The Trojans have played three of their nine games so far and scored their first goal in the second match against Chocowinity Middle School. With no youth program to draw from and fewer than 200 kids from pre-K through eighth grade, progress is measured in skills and work habits mastered rather than wins and losses.

The town owns the field, which has sat unused behind the school since the football team stopped using it years ago and has donated the goals and equipment.

“We are very grateful to them for their support,” Windley said. “It’s been a community effort so far and we are very pleased with the way it’s gone. Our kids need to be outside and soccer is the perfect sport to help them get in shape. Word has spread and I’m sure we’ll have more players in the program next year.”