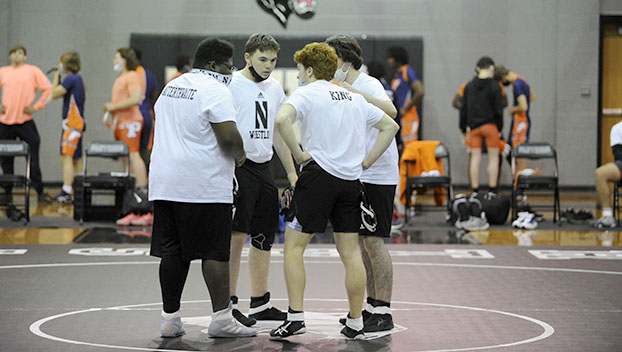 High school wrestling is usually a winter sport, but COVID-19 delayed it until now. The delay gave Northside High School officials more time to plan their first-ever wrestling team. Click HERE to view a photo gallery from the match.

“We just felt like it was the right time to start a team,” Panthers Athletic Director Jared Adams said. “Washington and Southside have teams and everyone in our new conference for the next four years has one except one school, so we went for it. The county bought the mat for us and we funded the uniforms. Coach Garcia has put in a lot of work getting the program going and it should be a plus for us.”

Daniel Garcia teaches band at Northside, but the former Pam Pack wrestler has been an assistant at his ala mater for the past six years. Garcia earned a Teaching Fellows scholarship to North Carolina A&T in Greensboro, where he wrestled on a club team and defined his career path.

“I was too small to play football in high school and wasn’t into soccer or baseball, but I found my niche with wrestling,” he said. “I started in the 103 pound class, then went to 112 as a senior. I’ve gained some since then, but I’ve always loved the sport and think it will be a great thing for our school.”

Practice started Monday with seven wrestlers, none of whom had taken the mat before. A freshman, three sophomores and three juniors make up the first Panthers squad and Garcia started with the basics.

“We started with the stance, reviewed the terms, then went over the rules and techniques,” Garcia said. “We’ve been planning this for a while and the kids have been watching YouTube videos on their own before practice started, so they had some understanding of what they were doing.”

The Panthers have 14 matches and Garcia has used his experience to teach a crash course in grappling so far.

“Coach Penhollow at Washington has been a great resource now and I learned so much coaching with him,” Garcia said. “I look at it like we are providing an opportunity for kids to succeed. I learned so much from wrestling in high school and I want it to be a good learning experience for my team. The guy across from you weighs the same and it’s up to you to figure out how to come out on top.”