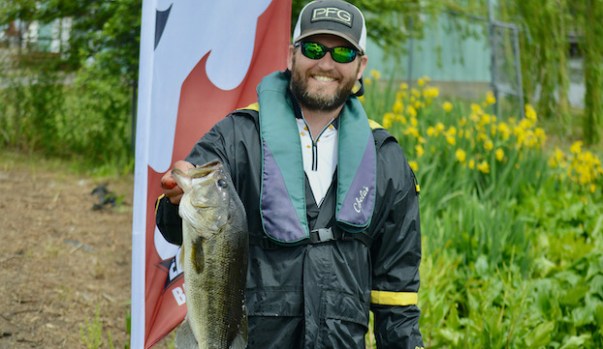 Justin Peaden of Greenville reeled in the days biggest catch. He collected $300 for his 6.18 pound bass. (Steve Barnes/The Daily News) 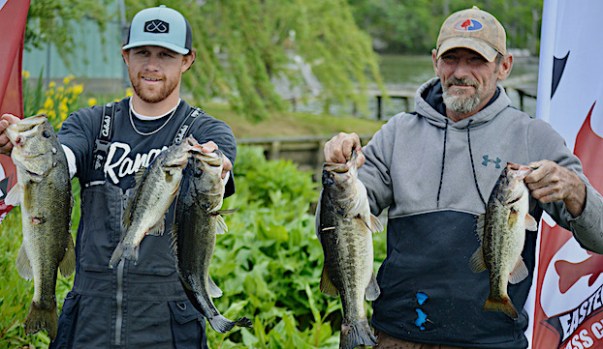 Bubba Barnett (left) and Jeremy Miller of Jones County won for the second time in as many tries this season with a five fish total weight of 13.9 pounds. (Steve Barnes/The Daily News)

The horn sounded around 6:20 Sunday morning and 66 boats hit the water at the Havens Gardens launch for the Washington stop on North Carolina Bass Fishing Challenge tour.

The two-man (and one husband and wife) teams from Washington, Chocowinity, New Bern, Aulander, Micro, Walstonburg, Whitakers and points in between fanned out to their favorite, perhaps secret, spot in search of the prize-winning catch.

Some nine hours later, Greenville’s Justn Peaden claimed the $300 prize for biggest catch with a 6.18 pounder.

“I got him on the Tar (river) over in Tranter’s Creek,” Peaden said. “The wind was a little rough today, but if you stay patient and know your spots, maybe you’ll get lucky.”

Bubba Barnett and Jeremy Miller of Jones County repeated their victory in the first event of the season last month on the Roanoke River in Plymouth.

Their five biggest fish weighed 13.9 pounds and they split the $1,900 first prize.

“There’s really no secret to winning again, because conditions and the water were totally different than the last time,” Barnett said. “We were out east on the Pamlico, maybe near Goose Creek and we had to come back three times to catch the ones we turned in. The water level and how the wind was blowing told us it was a good spot.”

Each fisher paid the $60 registration fee for the catch-and-release event plus a one-time $25 fee to join the tour. Tournament director Jeffrey Davis paid out the top 11 places.

“Washington is always a popular stop for us, but the wind and low water level made it tough today,” the Martin County native who formed the tour in 2015 said. “We’re pleased with the turnout and hope to have another successful season.”

There are five stops left, twice in Plymouth, New Bern, Edenton and Lake Gaston. Fishers earn points at each stop, standings are updated after each event and they crown a season champion in the fall.

“I like the competition and being out on the water,” Barnett said. “It’s exciting to bring in the big one and disappointing when one gets away.”