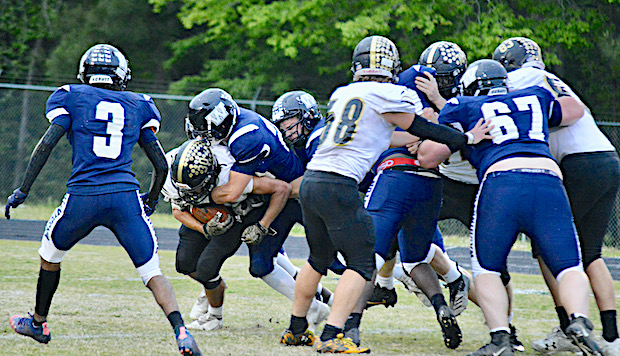 The Washington High School football team hosts St. Pauls Friday night in the East regional final. Both teams have an eye on what lied ahead-a trip the state championship game Thursday in Raleigh or Chapel Hill.

St. Pauls is a public school in St. Paul, N.C. between Fayetteville and Lumberton in Robeson County. The Bulldogs and the Pack both like to run the ball, but the visitors average 124 yards a game through the air in addition to 223 on the ground.

“We will emphasize our pass coverages more in practice this week,” WHS coach Perry Owens said. “We will honor the pass, but they still run it 75% of the time. They are big, physical and athletic, but we expect that with a trip to the state championship up for grabs.”

The Pam Pack counter with junior Terry Moore who has 1,344 yards and nine touchdowns and senior Jaden Hambric with 1003 yards ad eight TD’s. Both average over 10 yards per carry.

“We take what the other team gives us and so far, we’ve been able to run the ball effectively,” Owens said. “We can throw it and will adjust if needed. We’ve improved greatly on defense since our starters got healthy, but we have to avoid turnovers in the red zone and silly penalties.”

The winner will play the North Davidson/Salisbury winner Thursday, May 6 at 7 p.m. in Carter-Finley Stadium in Raleigh or Kenan Stadium in Chapel Hill.

“The kids see the big stadium on the horizon, but we’re not there yet,” Owens said. “We have to stay focused on this game and earn it on the field to get there.”

The state association will make the final site announcement after Friday’s games. This week’s game starts at 7 p.m., half an hour later than usual to accommodate St. Pauls travel schedule. Admission is $10.