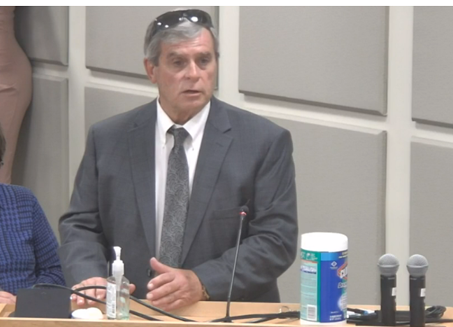 Among them was Aurora Mayor Clif Williams, who provided a vote of confidence to Sheriff Ernie Coleman and urged the committee to work through any differences it has with the Sheriff’s Office.

“Obviously y’all have some problems with Ernie. I don’t,” Williams said. “He’s been very good helping us down in Aurora, because we can’t afford to have a police officer. … We’ve kept close communications with one another, and I think he’s done an outstanding job for us.”

Williams said he’d be happy to serve as a liaison between Coleman and the police committee.

The committee, which consists of Beaufort County Commissioners Hood Richardson, Stan Deatherage and Randy Walker, is tasked with researching the feasibility of establishing a county police agency that would function similarly to Gaston County’s police department. Gaston County’s police agency serves as its county’s primary law enforcement body, and a police chief who is appointed by the county manager heads the department. The Gaston County Sheriff’s Office still exists, and it handles duties relating to courthouse security and civil process administration, jail operations, gun permit administration and other areas.

Local legislation will be needed if Beaufort County eventually decides to go forward with seeking the establishment of its own police agency. Rep. Keith Kidwell has already said he will not support any such legislation. Kidwell and several others have claimed that the committee is trying to “defund” the Sheriff’s Office.

On Thursday, committee members emphasized that their purpose is strictly fact-finding, adding that their goal isn’t to get rid of the sheriff.

Williams said he wants what’s best for his town and all other Beaufort County residents who live south of the Pamlico River.

“This could be a bad political decision,” Williams told the committee. “And I don’t want to see that happen. You guys have certainly been good to my town, and I consider all of y’all friends, and I think y’all do a good job. This concerns me, what could happen.”

“It would be a political decision,” Deatherage responded. “And if it’s made correctly, it could be a good one, regardless of what happens. But it needs to be done well and thought out precisely.”

Others who spoke during the public comment period included Barbara Gaskins, who urged the committee to move forward with its research, citing current and past issues with the Sheriff’s Office.

Carolyn Garris spoke as well. Garris is the chair of the Beaufort County Republican Party, but she told the committee that she was appearing before them as a private citizen. Garris backed the county’s current law enforcement system, noting that the sheriff is currently accountable to the voters rather than elected officials.

Patricia Garrison suggested that Beaufort County citizens should be given the option to vote on which option they prefer if the committee finds that an alternate form of law enforcement would better serve the county.

Gary Blount, who worked in law enforcement for 14 years, said he agrees with the committee’s direction. He said establishing a county police force would help improve job security. Blount said if deputies didn’t have to worry about whether they’d keep their job at the end of each election cycle, they’d be able to focus more on serving community and less on politics.

One of the next major steps in the committee’s research process is a trip to Gaston County to talk with administrators there about how they run their police department.

The committee has asked County Manager Brian Alligood to work on scheduling that trip for sometime in July. The committee was planning on making that trip sooner, but other obligations — combined with upcoming events in the county’s budget cycle — caused them to reschedule. Richardson said all of the county commissioners are invited to join the committee on that trip.

In the meantime, the committee will meet again at 6 p.m. on June 17.