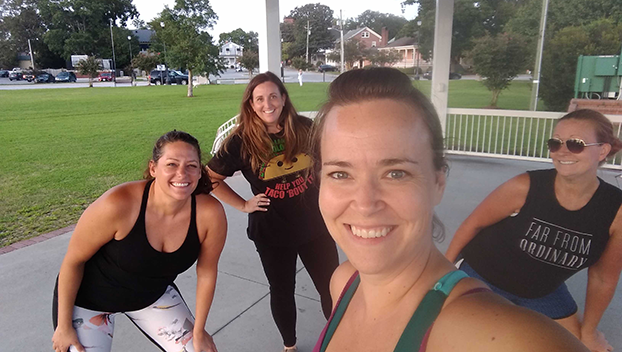 FiA ENC Washington meets multiple days a week for group workouts. Photos like this are often captured to celebrate once the workout is complete. (Photo submitted by Heather Pendelton)

Local ladies band together for fitness

Washington’s regional branch of Females in Action meets five times a week for activities that strengthen mind, body and spirit through group workouts.

Females in Action (FiA) is a national organization that has a number of branches across 16 states in the U.S. Modeled after the similar program for men, F3, FiA is a peer-led workout community that accepts female-identifying individuals of all ages and fitness levels.

“We average anywhere from eight to twelve ladies but are always looking to increase our members,” said Heather Pendelton, a member of the FiA ENC Washington branch. “In FiA we like to say we are stronger together and better together. We really stand behind that here in Washington. We motivate and encourage each other to be the best version of themselves. All fitness levels and abilities are welcome and we will treat you like family from the moment we meet you.”

All workouts are held on a weekly basis and FiA ENC Washington meets every weekday in the early morning or afternoon hours and last for 45 to 60 minutes at a time. These workouts are held outside at Mac Hodges Festival Park and are free to attend.

“FiA is peer led, which means the Q, lead, for that morning’s workout gets to choose what she wants to do. Most are a boot camp style. I like Barre and flexibility so my workouts include some of those elements. Honestly, I love the variety that each lady brings to her Q,” Pendelton said.

Pendleton got involved in Washington’s FiA after moving to the area from Pittsburgh in 2018. At her first meeting, Pendelton, now known as “Made of Steel” to her fellow FiA members, was welcomed and given her nickname. This nickname is chosen by your fellow members and usually represents an aspect of your personality or story.

“I knew nobody and had very few avenues to meet new people. I saw something on Facebook about FiA ENC Washington and just showed up to a workout. They were all so welcoming and encouraging that I just kept coming back,” Pendleton said. “It really has helped me to form roots in this community and I am so very thankful that I took the chance and tried it.”