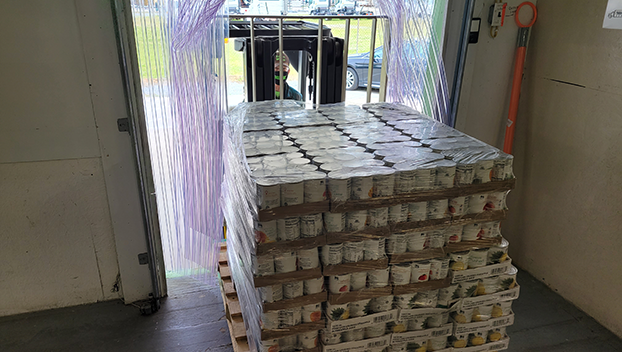 STUNNING SUPPLY: Longtime volunteer Ed Ambrose got the happy task of driving hundreds of pounds of food into the processing area of Eagle Wings Food Bank. The huge delivery cost $1,900 and was donated by a man who insisted on remaining anonymous. (Photo submitted by Tyler Richman)

Mouths have been dropping in amazement all over town as area outreach leaders and their helpers have gushed about the recent pleasure of using $1,900 from an anonymous donor to buy extra food for the clients of Eagles Wings Food Bank.

“A gentleman dropped by a few weeks ago,” said Anne Marie Montague, executive director of Eagles Wings Food Bank. “He said ‘I just got my stimulus check, but I don’t need the money. What do you need?’ We asked his name, I promise you, but he repeatedly said ‘you don’t need my name. I’m doing this because it’s the right thing to do’. We were just amazed.”

Montague immediately introduced the man to Tyler Richman, operations manager at Eagles Wings. They made a list of items that run out quickly because they get chosen most often by the outreach’s clients.

“He came back later with a truckload full of food and said ‘this is only $400 worth of stuff. I’ve still got more money to spend.’ It was like Christmas in July, but in April. That’s when I called Reggie at Food Lion,” Montague said.

“He literally just walked in, paid for it, and said ‘see you later.’ Folks will give me $20 around the holidays and tell me to give it to someone who needs it. But that is by far and away the largest donation we’ve ever seen,” said Reggie Beamon, the store manager at the Food Lion where the bulk orders were sent by Eagles Wings staff. “He told me he wasn’t looking for recognition or to get his name out there. He was as quiet and secretive about it as anyone I’ve ever run into. That man is a rare, rare find.”

Montague said the two pallets of food were piled as high as she is tall.

“They were stacked with all the things we requested, all the items our people want and like and use. When you see all that being unloaded it’s unreal, amazing and beautiful,” Montague said.

According to Montague, regulars who rely on Eagles Wings’ are grateful to this man for his contribution to the community.

“That kind of care is beautiful, a wonderful aspect of our life in Beaufort County. I could live wherever I want to, but that’s what has kept this Yankee here for 32 years. That gentleman earned his wings and his halo,” Montague said.