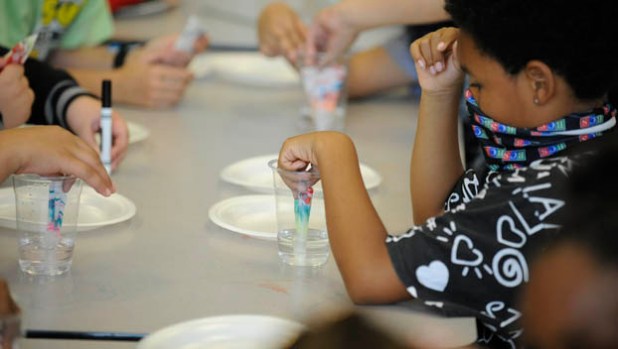 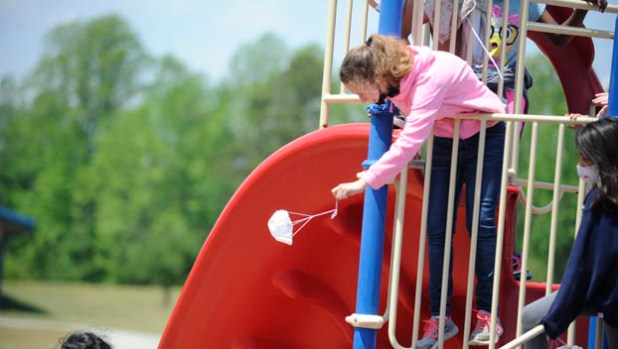 TESTING: At one of the Science Day stations, students put together miniature parachutes and dropped them off the school’s play structure, aiming for several targets that had been set up on the ground. (Brandon Tester / Washington Daily News) 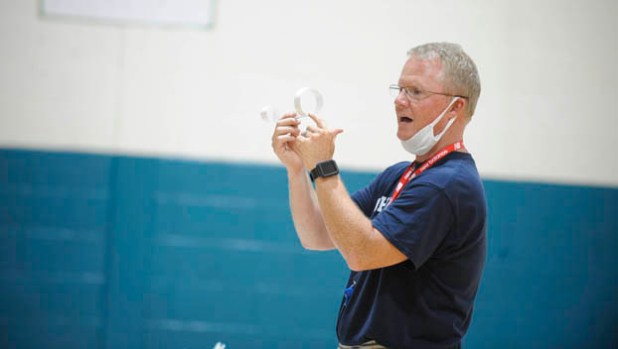 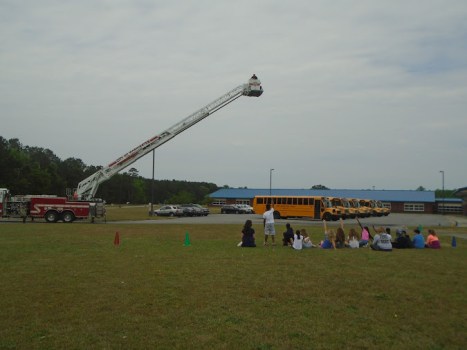 LAUNCH: With the help of a firetruck’s ladder, John Small Elementary teacher Kevin Mitchell launched a Galilean cannon from a height of 60 feet, which is a new Guiness World Record, pending verification by the company that administers those records. (From John Small Elementary)

The North Carolina Science Festival prepares activities for Science Day —a statewide event that is typically held at night, but was switched to the daytime this year due to the pandemic — with funding from the Duke Energy Foundation. Several stations were set up throughout the school building, each one consisting of an experiment or project that would help students learn about science concepts. At one station, for example, students designed cell models using plastic Easter eggs. At another station, students crafted miniature parachutes using coffee filters, paper towels, paper clips and other materials, and tested their parachutes by dropping them from the school’s play structure. Elsewhere, students experimented with USB digital microscopes

One station stood out from all the others.

The school set out to set a new Guinness World Record for highest launch from a Galilean cannon, which consists of a stack of balls arranged by weight, with the heaviest ball at the bottom of the stack and the lightest ball at the top. When it’s time to launch, the cannon is dropped from an elevated surface. When the cannon hits the ground, the kinetic energy from the lower balls launches the top ball into the air, typically reaching a height greater than that from which it was dropped.

The current record for the highest Galilean cannon launch is 44 feet, 6.5 inches. With the help of a firetruck ladder, John Small teacher Kevin Mitchell launched a Galilean a cannon from a height of 60 feet. The school is in the process of sending in the materials needed to verify the record and make it official.