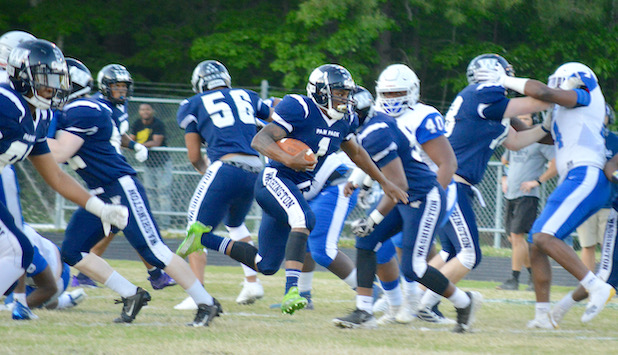 Senior Jaden Hambric bursts up the middle in the first half of Washington’s 34-23 loss to St. Pauls in the East regional final. (Steve Barnes/ The Daily News)

The Pam Pack was trying to make it to the state title game for the fourth time in school history with the most recent trip in 2014, but two big plays in the second half made the difference.

The Pack (7-2) marched 80 yards on its first possession as junior quarterback Hayes Pippin capped the drive with a 2-yard scoring run. The Bulldogs answered with a 65-yard scoring pass for a 7-7 tie after the first quarter.

WHS took a 13-7 lead on senior Jaden Hambric’s 9-yard run midway through the second quarter, but St. Pauls responded with a 5-yard scoring drive to regain the lead at 20-14.

Washington took over at its 28 and Pippin hit senior Juan Rosario for a 6-yard scoring pass to take a 20-14 halftime lead.

Momentum swung to the Bulldogs out of the halftime locker room as the Pam Packs leading tackler, senior linebacker Walt Gerard re-injured his right shoulder in the first half and couldn’t play in the second.

The Bulldogs took advantage with a 78-yard scoring drive for a 21-20 lead late in the third quarter.

Washington went ahead on the next possession after converting a fake punt, as Ridge Zerniak booted a 37-yard field goal for a 23-21 advantage with 9:01 to play.

That’s when the game turned St. Pauls’ way. On the first play from scrimmage, sophomore Kemarion Baldwin, who entered the game with 1,063 rushing yards, burst around the right side for a 68-yard touchdown run and a 27-23 advantage.

Washington couldn’t go anywhere and had to punt from its 32. After fielding a bad snap, Zerniak’s short kick was returned by Erick Washington for the eventual winning score.

“Walt’s injury was huge for us and we didn’t execute in the red zone late,” coach Perry Owens said. “He is one of the best players in the state and the scoreboard showed the difference with him not out there. I am very proud of how far we’ve come in the last four years and this group of seniors has meant so much to our program. Our future is bright, but I hate it for them that they didn’t get to play for a state title.”