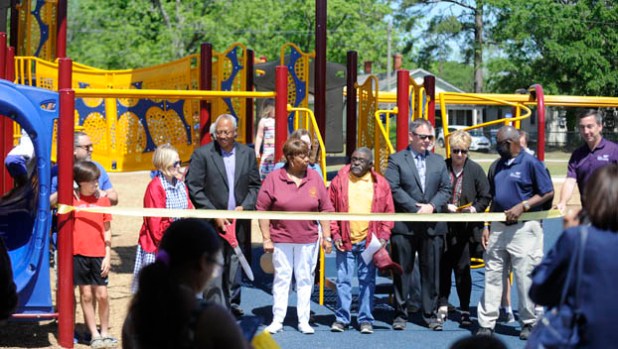 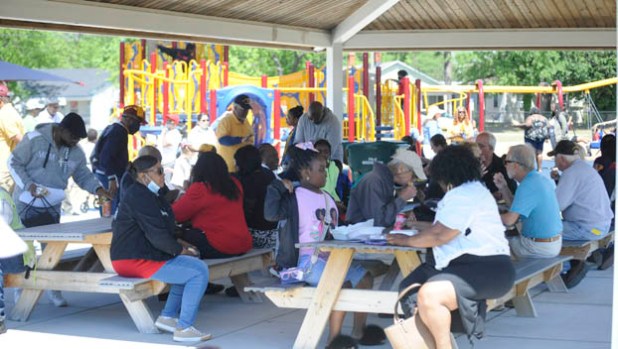 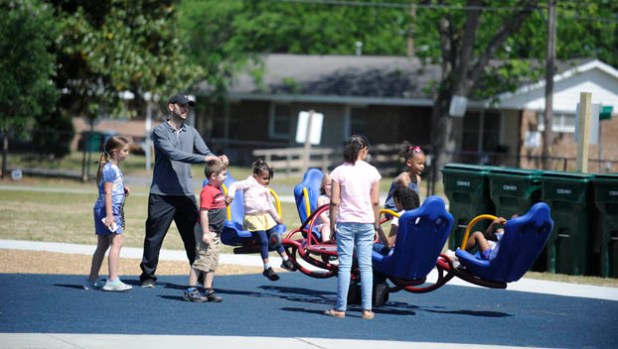 Children at the ribbon-cutting ceremony were able to try out the park’s new playground. One of the park’s play structures is seen in this photo. (Brandon Tester / Washington Daily News)

The ribbon-cutting ceremony for P.S. Jones Memorial Park on Saturday was everything city officials hoped it would be.

The weather was ideal and the turnout was large as the community gathered to celebrate the official opening of the new park, which is named after Peter Simon Jones, who served as principal of what was then the Washington Colored Public School from 1927 to 1949. The original buildings that housed that school — which in 1950 was named P.S. Jones High School — sat near where the new park is now.

“It brings joy to my heart to see it finalized,” Mayor Donald Sadler said. “To see the kids in the community out enjoying themselves and loving this park.”

Sprawling out from the corner of West 11th and North Bridge streets, the new six-acre park has been in the works for several years. The park consists of a play structure, a picnic pavilion, a concrete walking path and a public restroom. There’s also a large open area for recreational activities, something Washington Parks and Recreation Director Kristi Roberson said was an important and intentional part of the design — specifically because it gives the community a large area to utilize while also leaving plenty of room for additional projects and growth.

“It has been a wonderful asset to the community and the City of Washington,” Roberson said. “It’s fenced in — it’s a safe place to come out.  The kids are able to walk or play on the playground, and you don’t feel concerned that they’re going to run out into the streets.

“I have worked with a lot of individuals with the (P.S. Jones) Alumni Association, the county and the school board,” Roberson added, “And I’m just so glad that so many of them were here today to take part in the ribbon cutting.”

The ceremony featured remarks from several local officials, including Roberson, Sadler, City Manager Jonathan Russell and Beaufort County Schools Superintendent Matthew Cheeseman. The park is owned by the school system and maintained by the City of Washington.

Washington first responders were on hand to serve hot dogs and beverages. A food truck was on site as well.

GOOD FOR THE COMMUNITY

Those who attended the ribbon-cutting ceremony said the fact that so many different community entities are involved in the park’s ongoing development makes the property even more valuable.  In addition to the city and the school system, local organizations such as the Boys and Girls Club of the Coastal Plain — which has a local unit located across the street from P.S. Jones Memorial Park — will benefit from using the new facility.

“It’s a great opportunity where our community and all the different entities that supported the project can see it come to fruition,” Cheeseman said. “… I hope the community can continue to enjoy it over time.
“And maybe it’s just the beginning. This park seems to really have great symbolism, and I know the P.S. Jones Alumni group looks forward to doing greater things here. And I believe our board of education would love to support that. “

The new park is located next to school buildings that once housed the Ed Tech Center and served as the previous location of P.S. Jones Middle School. P.S. Jones High School became a middle school when local schools were integrated.

That property houses the P.S. Jones Alumni Museum, which is currently in development. The museum will feature exhibits detailing the history of the school from its beginnings as the Washington Colored Public School until now.

What the future holds for P.S. Jones Memorial Park remains to be seen, but several ideas are already being considered.

“There’s a lot of space here to be utilized,” Russell said. “And we’ve got some ideas, but we want to solicit public input for future amenities that we will have out here.”