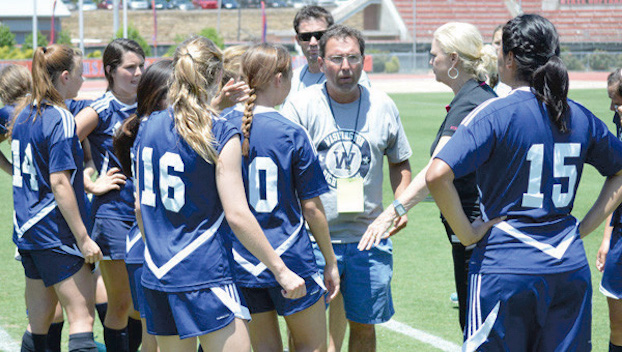 The Washington girls soccer season ended with a 7-0 home loss to Clinton in the first round of the 2A state tournament Tuesday night, and Ed Rodriguez’ career as the head coach ended as well.

The 56-year old Rodriguez announced his retirement from coaching earlier in the spring after leading the Pam Pack to eight conference championships, nine state tournament appearances and one trip to the championship game in 2014 during his 10 year tenure.

“It’s time for someone else to have input into this program,” Rodriguez said. “I have a lot of outside things going on at this point in my life and it’s time for a change. I’ve enjoyed it, am grateful for the opportunity and will miss my players.”

The Pam Pack finished 9-2 in this COVID-19 shortened season and extended their conference winning streak to 62 straight matches dating back to the end of the 2013 campaign.

“This group did very well given their youth and lack of experience playing with each other,” Rodriguez said. “We really didn’t have a season last spring because of COVID and only 10 regular season games this year, so we had to gel quickly. They accomplished a lot in a short time period and I’m proud of their effort.”

Rodriguez compiled a 118-47-4 record as the Pam Pack girls head coach. He started as the boys and girls JV coach in 2008 and has assisted Jim Kozuch with the varsity boys since then.

“He’s helped tons of kids become better players and people over the years,” Kozuch said. “I coached my very first game against him while he was in Williamston and he’s had a tremendous impact on both programs here. The girls program success is because of his hard work and dedication and I will miss coaching with him very much.”

Rodriguez coached most of the Pam Pack girls standout players and finds it hard to single anyone out. However, he has a soft spot for the ’14 team that lost in the state finals after losing two key players to knee injuries during the playoffs.

“That was such a courageous, motivated group who had the desire and work ethic to succeed,” he said. “Alana Jefferson, Harley Hudson and Christian Heggie were seniors on that team. Emily Alligood was the best goalie in the state in my opinion and Sydney Edwards was a freshman. She (Edwards) was about 5’2, but she played like she was six feet tall. Sydney was an amazing player who did tremendous things for us. I’ve been fortunate to coach Lilly Francis Lobos the past four years and (sophomore) Taylor Mitchell is going to be special also. I could go on, but you don’t have enough room in your paper to mention all the great ones I’ve coached.”