Northside’s trip to Raleigh was 63 years in the making 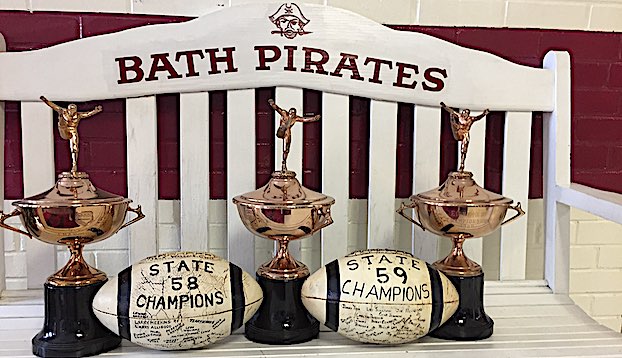 The trophies from the 1958, ’59 and ’60 Bath High School state championships on display. The 1960 commemorative football has been missing for several years. (Claudia Alligood/ for the Daily News)

Some families can trace their history back hundreds of years. Members of the 2021 Northside High School’s East championship football team can follow their roots back to 1958 at Bath High School.

As the Panthers get off the bus at Carter-Finley Stadium in Raleigh Saturday morning to face Murphy for the 1A state title their thoughts will be in the present, but it’s worth a look back to where it all began.

The 1958 Bath Pirates were part of six-man football in North Carolina, the final year of such competition in the state.

There were three offensive linemen, a quarterback and two others in the backfield or split wide. There were no hand-offs, but pitches to players to start runs were allowed. The center was also an eligible receiver within a certain distance from the line of scrimmage.

Those Pirates, under coach Jack Wallace, beat Laurel Hill for the first of three straight state titles, with the next two at the eight-man level. The Pirates were undefeated all three seasons and had a 44 game winning streak during the run.

They moved up to 11-man football in 1961 and made it back to the state finals in 1982, where they lost to Robbinsville, 21-6 at home. Robbinsville hosted Belhaven Wilkinson the previous year and prevailed, 68-0.

“I was in sixth or seventh grade and I remember watching Bubba Waters, who went on to play linebacker at ECU,” Boyd said. “Walt Davis was the coach and I remember how big of a deal it was for our community.”

Bath and Wilkinson were consolidated into Northside in 1990. Boyd was part of the last graduating class at Bath HS and was an assistant on Bing Mitchell’s staff the first time Northside played for a state title in 2000. They lost to Graham, 31-6, in Kenan Stadium in Chapel Hill.

“It was a special moment to step on that field and I remember thinking about the process of getting there and how hard it was to reach a state championship game. It’s something I will never forget and I hope our guys have the same feeling about this year. We know there are plenty of Bath and Wilkinson folks who are cheering for us and we appreciate it. Our administration has been very helpful and supportive and we are going to do our best to bring another state championship back to Beaufort County.”