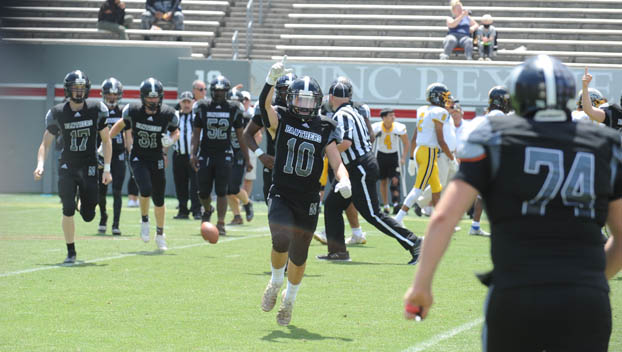 The topic that made Northside coach Keith Boyd most emotional following the NCHSAA 1A state championship game Saturday had little to do with what just unfolded inside Carter-Finley Stadium.

It was his recollection of what it took for the Panthers to earn that trip to state that brought tears to his eyes.

“Hats off to every one of them, because we started in June like everyone else.  We continued through the end of July, and things didn’t look real certain, whether we’d even have a season or not,” Boyd said after Murphy claimed its 10th state title with a 14-7 win over Northside. “We took August off, these guys were bugging me about, ‘Let’s get together.’ We practiced two or three days a week, August, September, October, November.

The same resiliency the Panthers showed in the height of the COVID-19 pandemic showed on the field Saturday, as Northside fought back in the second half after heading into the locker room down 14-0.

Fueled by a large turnout of fans from Beaufort County and beyond, the Panthers made the best of what could have become a worst-case scenario. Murphy, now a 10-time state champion, was set to receive the ball to start the second half.

Northside’s defense quickly got to work in the third quarter, forcing a turnover on the opening drive and setting the stage for James Gorham’s 73-yard touchdown run down the sideline. That put the Panthers on the scoreboard and pulled them to within a touchdown of the Bulldogs. Just as importantly, it provided a jolt of energy to the Panthers’ sideline and brought a large crowd of fans from Beaufort County and beyond to its feet.

“We made a few adjustments in the second half, came out and executed those,” Boyd said. “We got back into blocking and staying with our blocks early in the second half. James was able to bust one down the sideline to put us right back in the thick of it. We played with a lot of heart all year.”

Northside’s defense continued to ride that momentum as the Panthers held the Bulldogs scoreless in the second half. Facing a talented offensive line that includes Florida commit Yousef Mugharbil, the Panthers clamped down on Murphy’s running game.

“They had a real good game plan against us,” Murphy coach David Gentry said. “And they made us pass the football.”

Northside’s offense was more productive in the second half, but Murphy’s stingy defense and some costly penalties prevented the Panthers from further closing the deficit. A fumble recovery gave the Panthers a final chance to tie or win the game with just under four minutes left in the fourth quarter, but the Bulldogs stopped Gorham four yards short on a fourth-down run as the two-minute mark approached.

Gentry — who has now coached in 12 championship games — was impressed by Northside’s performance.

“I think they stack up with Plymouth, back in Plymouth’s days,” Gentry said. “Good atheltes, good speed, they do a good job up front. … I think it’s very similar to the good Plymouth teams we played in ’12 and ’13.”

Between 2012 and 2016, Plymouth appeared in five straight 1A state championship games.

“They (Northside) are good,” Gentry added. “They coached well, and they did what they did extremely well.”