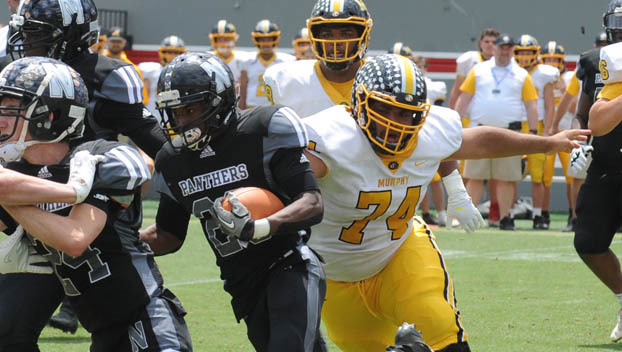 Northside senior James Gorham ran for 161 yards and scored the Panther’s only touchdown in a 14-7 loss to Murphy Saturday in the 1A championship game. (Brandon Tester/ The Daily News)

RALEIGH — Northside’s quest for the first football state championship in school history proved elusive in a 14-7 loss to Murphy in the 1A title game on a sun-drenched Saturday afternoon in Carter-Finley Stadium in Raleigh.

The Panthers (8-3) were facing a perennial state power, whose veteran coach had been in 11 previous championship games with nine victories.

The Panthers looked they would strike first when senior tailback James Gorham broke a 27-yard run to the Murphy 21 yard-line on the second play. However, after two penalties, the Panthers drive ended with an interception at the five on fourth down.

The Bulldogs (10-1) responded with an 82-yard scoring drive for a 6-0 advantage with three minutes left in the first quarter.

“I think it would have been different if we could have scored first,” Northside coach Keith Boyd said. “Those penalties killed us and there were several more on offense later that we couldn’t overcome.”

Panthers junior Elijah Covington recovered a fumble that snuffed another Bulldog drive at the five yard line late in the first quarter, but the offense couldn’t move the ball.

Murphy junior quarterback Kellen Rumfelt responded with a 55-yard scoring pass to senior Isra Smith for a 55-yard touchdown pass on the possessions’ first play for a 14-0 lead with 5:52 left in the first half.

The Bulldogs would find the endzone no more, thanks to a resilient Northside defense that made some halftime adjustments.

“We went to zone coverage for the second half and that made their quarterback go to his third or fourth option,” Boyd said. “We got some pressure on him and defended better in the second half.”

Gorham broke free on a 73-yard scoring run on the Panthers second play of the second half to switch the momentum. Both teams had chances, but couldn’t convert in the third quarter.

Senior Sam Vansant stopped a Murphy drive with an interception at the 25 yard line with 11 minutes left, but the Panthers went three and out. They had one more chance after sophomore Carson Clinkscales recovered a Murphy fumble with 3:42 to play.

Two more penalties pushed Northside to their own 18. The final offensive play of the season was Gorham’s 15-yard run on fourth down.

“They played us better than anybody has all year and we’ve beaten some really good teams,” said Murphy coach David Gentry. “We are a run-first team and they made us throw. They are very well-coached and made us work harder than we planned on to win.”

Gorham was the Panthers offensive player of the game with 161 yards rushing on 17 carries. Senior Tyler Harris won the defensive award with nine total tackles.

“We could have laid down at halftime, but we didn’t,” Boyd said. “I am so unbelievably proud of my guys and their effort. Our defense was outstanding, but the penalties on offense killed us. It was a great experience with a great bunch of players and I’ll never forget it.”

Northside had 204 rushing yards, while holding Murphy to 79. The Bulldogs passed for 255 and had 12 first downs to the Panthers six. Northside recovered three fumbles and intercepted a pass, while throwing one interception.