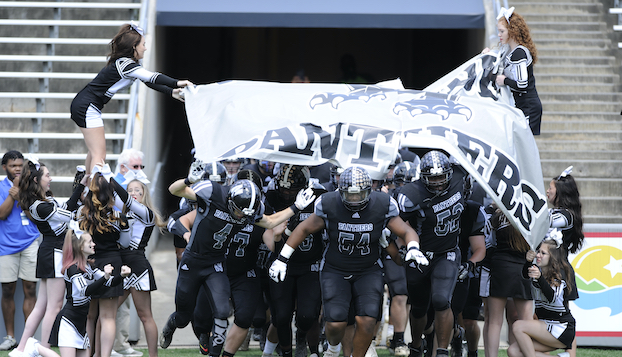 Tears flowed freely on the Panthers side of Carter-Finley Stadium and in the stands behind them Saturday afternoon in Raleigh.

Tears of disappointment that the 14-7 final score didn’t go their way, tears of sadness that the journey that started back in the summer of 2020 was over, tears of frustration over what might have been, but also tears of pride and satisfaction over all they accomplished together and knowing they left nothing but their best effort on the field.

The Murphy Bulldogs won their 10th state title, all under veteran coach David Gentry, who has the most victories in state history, 417, in 46 seasons and the most at one school, 357, in 35 years at Murphy.

After the game, Gentry told Northside coach Keith Boyd and the assembled media (in separate conversations) what he thought of his opponent.

“He told me we were the best team they had played all year and we made them do things they weren’t used to doing,” Boyd said. “He was very complimentary of our players and staff and I think he meant it because he didn’t have to say as much as he did. That makes me even prouder of our effort.”

The Panthers were trying to win the school’s first championship in only their second trip to the title game. The first was a loss to Graham in Chapel Hill in 2000.

“There were a couple of things that didn’t go our way early that could have changed the whole game,” Boyd said. “It looked like we were going to score on our first possession and that would have been huge. We played extremely hard and gave them a heck of a fight. I thought our defense was outstanding and I couldn’t be any prouder of this group.”

The Panthers made sure they soaked it all in from the time they left school Friday morning until after the 12 seniors took off their uniforms for the final time.

“it more than lived up to the hype and expectations,” senior linebacker Tyler Harris said. “it was amazing to come through the tunnel and compete in such a big environment.”

Two things stood out to Boyd.

“Our trip from school to the Pitt County line usually takes about 30 minutes,” he said. “There were so many people lining 264 that it took us an hour. We slowed down a lot to wave and thank folks for supporting us. The other thing was when we loaded the busses to leave the hotel for the game. We had the hip-hop music blasting and I could tell we were ready. It was a special team moment and it gave me goosebumps.”