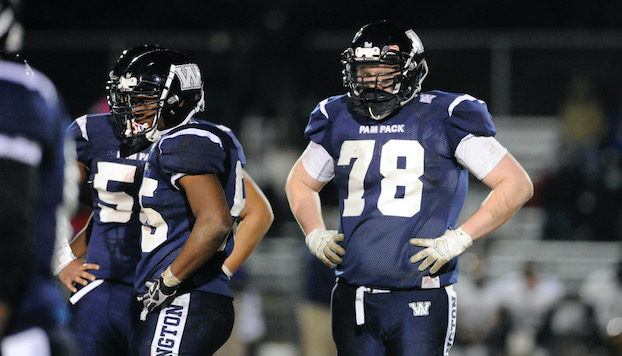 Washington High School offensive tackle Ben Swinson will suit up for the East All-Stars against the best from the West, Wednesday, July 21 at Grimsley High School in Greensboro.

The 6’3 280 pound right tackle was a big part of the Pam Pack’s 9-2 season that ended in the East regional final. WHS had one of the top rushing and scoring attacks in the state behind the senior.

“He’s the reason our jet sweep to the right was so effective,” coach Perry Owens said. “I could use him to pull and lead us left as well. He’s worked hard in the weight room since he joined us before his sophomore year and replaced 20 pounds of goo with 20 pounds of muscle. The improvement is noticeable and he had a great senior year for us.”

Swinson transferred from J.H. Rose HS in Greenville when his dad became principal at Washington High School. He wasted no time in joining the Pam Pack’s off-season program.

“It was during the Tarboro game that fall when I realized I had a chance to be successful if I kept working,” Swinson said. “I bought into what Coach Owens wanted us to do in the weight room and getting to go to the East-West game is the payoff.”

The game started in 1949 and was played every year until 2020 because of COVID-19. Swinson will be the 31st Washington player on the East squad, coached this year by Paul Cornwell of Ayden-Grifton. Uriah Lawrence represented the Pam Pack in 2019.

“We could only nominate two seniors and I went with Ben and Walt (Gerard),” Owens said. “This game is for guys who need that extra exposure to get more college coaches attention. I’m confident Ben will be playing football in the fall.”

Meanwhile, Swinson looks forward to playing with and against the best seniors in the state and what lies ahead.

“It’s a big honor to play in this game and it feels great,” Swinson said. “I’ve had a few offers and talked to a few coaches, so hopefully I’ll figure it out in the next couple of weeks or so. I’ve tried to be a leader on offense for us and I always play hard until I hear the whistle. Hopefully, that will get me to the next level.”