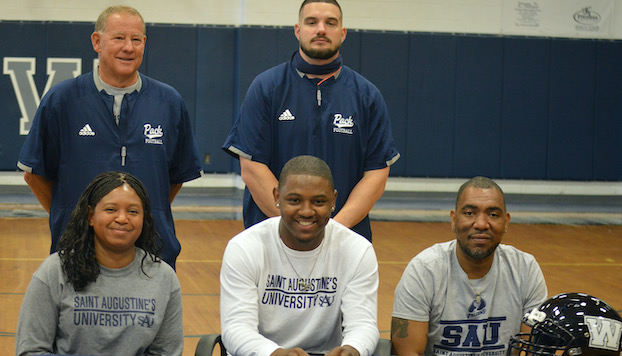 Jaden Hambric has fulfilled his dream of earning an opportunity to play college football.

The Washington High School standout running back chose Saint Augustine’s College in Raleigh and signed his National Letter of Intent Tuesday in the high school gym surrounded by his parents, coaches, teammates and friends.

“I’ve been thinking about this since middle school and am grateful to Saint Augustine’s for giving me the chance to play at the next level,” Hambric said. “I really enjoyed my campus visit and it felt like home. I’m looking forward to getting started.

First-year head coach David Bowser is in charge of rebuilding the Falcons, who went 2-8 in 2019 before sitting out last fall because of COVID-19. They compete in the Central Intercollegiate Athletic Association (CIAA) traditionally one of the top conferences in Division II.

Hambric chose the Falcons over Methodist and Elizabeth City State among other offers after rushing for 1,113 yards and nine touchdowns and trip to the East finals during the shortened spring season.

“He made the jersey #1 mean something again at Washington High School,” head coach Perry Owens said. “He averaged over 10 yards a carry and played a big role in rebuilding this program from 4-8 his freshman year.”

Hambric started the season a little behind his teammates, but he had a good reason. He donated bone marrow to his older brother Jordan just before the season started.

“He is recovering on schedule and is back home now,” Hambric said. “I knew everything would work out and it did. I kept him with me even though he couldn’t come to games and he was with us in spirit today.”