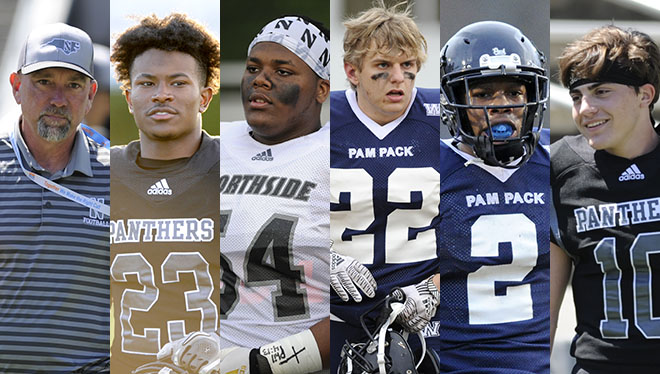 Boyd led the Panthers to only the second 1A state championship game in school history and finished with an 8-3 record. He is area coach of the year for the first time in his 15-year tenure at Northside.

“All the credit goes to my assistant coaches and players,” Boyd said. “You have to have coaches who are willing to put in the time and effort and you have to have players good enough to execute what we are teaching them. I am flattered and honored, but this is an award for our program more than anything.”

Northside’s James Gorham (Sr.) was selected to the flex position after leading the team with 1,473 rushing yards and 23 touchdowns. 6-foot-3, 310-pound Zion Wilson (Sr.) was chosen on the defensive line and Sam Vansant (Sr.) made it as a defensive back.

“Sam’s biggest attribute is his heart,” Boyd said. “He gave us everything he had on every play and made sure everybody was in the right spot in the secondary. He led us in tackles a couple of games and had a big interception in the championship game. I’m pleased the other coaches noticed his contribution to our success. James and Zion were also terrific players for us. All three will be hard to replace.”

Washington High School junior Terry Moore was named the offensive player of the year after helping the Pam Pack to the 2A East finals. Moore ran for 1,472 yards and nine touchdowns while averaging 11.2 yards per carry as the Pack finished 7-2.

Senior Walt Gerard was chosen at linebacker after leading WHS with 99 tackles in seven games, including 21 tackles for loss.

“Considering that coaches from as far west as Raleigh and as far south as Wilmington vote on this All-Star team, it’s a pretty high honor,” said Washington coach Perry Owens. “Terry and Walt were clearly two of the top players in the area when healthy and I think there will be several more honors headed their way in the coming weeks.”