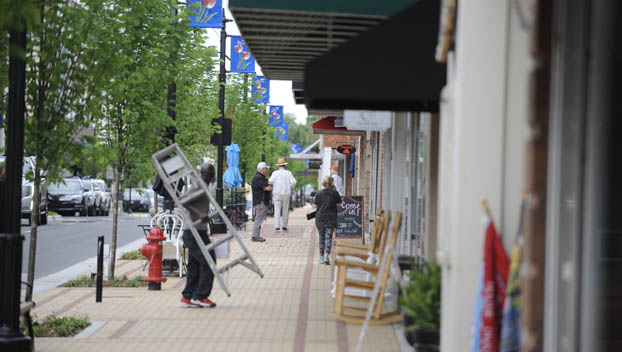 The Beaufort County Commissioners last week got a glimpse of how the COVID-19 pandemic has affected the local economy.

As expected, the local economy took some dips as businesses dealt with state-mandated closures, restrictions, sanitation protocols and other outcomes of the pandemic— particularly in the food service and arts and entertainment fields.

The pandemic’s long-term effects on the economy remain to be seen, but Beaufort County so far has responded relatively well in several areas.

“If you look at the impact of COVID on workforce numbers, we fared very well,” Beaufort County Economic Development Director Martyn Johnson told the commissioners last week. “In fact, when we look at the U.S. and North Carolina and even the region, we did better. And we consistently stayed at about 5.6% unemployment.”

Johnson said that that’s partly because people dropped out of the county’s workforce due to fear of COVID-19.

Johnson said each of Beaufort County’s municipalities have experienced “large and small” economic impacts from the pandemic.  For instance, the development of a new industrial park in Aurora has been delayed because officials haven’t been able to get out and inspect the wetlands in that area. The county previously estimated that the industrial park could increase Aurora’s tax base by more than 50%, The cancellation of the Fossil Festival, the temporary closure of the Aurora Community Center and delayed utility payments also hurt the city economically.

Bath saw its water and sewer receipts drop because Bath Elementary School is the most significant user of those utilities, and the school facility was closed for a while after Beaufort County Schools switched to remote learning. Other facility closures and event cancellations hurt Bath as well.

Belhaven has had similar issues with utility payments and temporary business closures.

Johnson said Chocowinity has experienced relatively light repercussions from the pandemic.  Like several other municipalities, Chocowinity has been dealing with delays in utility payments, as some residents have signed up for payment plans to address outstanding charges.

Pantego reported that it benefitted from a lot of its businesses being able to remain open during the pandemic because they were deemed essential.

Washington has taken the biggest hit from the pandemic, and not just for economic reasons. Johnson mentioned that the death of Mayor Mac Hodges from COVID-19 complications last August will continue to have a major impact on the city going forward. Hodges’ death, combined with a bevy of closures, cancellations and revenues related to the pandemic, put a large burden on the city.

Johnson didn’t have any major issues to report from Washington Park, noting that is a “small, quiet” community.

Beaufort County’s boat building, air filtration, medical, appliance and commercial interior industries have seen significant success during the pandemic. Companies have incorporated personal protective equipment and social distancing into their protocols in order to stay in line with COVID-19 restrictions.

“Most of the issues centered around labor shortages,” Johnson said. “Low wage earners found it — and I think still find it easier to stay at home rather than work, through various payments.”

Johnson added that the cost of raw materials has surged as well due to issues with demand and supply chains. He said some companies are redesigning products in order to shorten their supply chains.

HOPE FOR THE FUTURE

Johnson said Economic Development is looking at 16 future industrial projects, which could bring in 233 jobs and $27 million in investments.

“What I see is this is the time to invest in the future,” Johnson said. “We’ve had a huge fork in the road here. … A lot of consideration needs to be made of how to invest money that might be coming in from the federal government.”