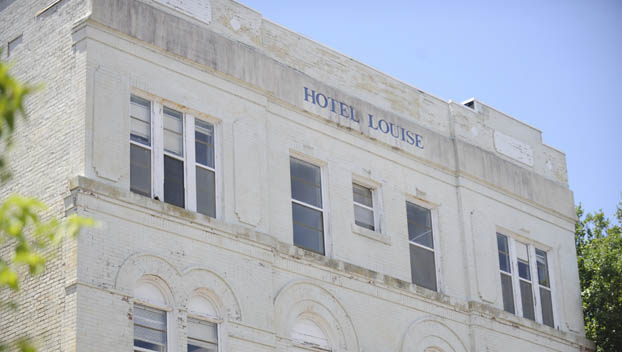 The Hotel Louise site has been vacant since 2010. It is contaminated with metals and inorganic contaminants according to the EPA. (Brandon Tester / Washington Daily News)

A $500,000 grant from the U.S. Environmental Protection Agency will be used to clean up the vacant Hotel Louise site on West Main Street in Washington, the agency announced Thursday.

Hotel Louise is one of seven projects in North Carolina that are set to receive a combined $2.8 million in Brownfields Cleanup and Assessment Grants. The funding serves underserved and economically disadvantaged communities across the country in assessing and cleaning up contaminated and abandoned industrial and commercial properties, according to the EPA.

“Through our Brownfields Program, EPA is delivering on the Biden Administration’s commitment to lifting up and protecting overburdened communities across America, especially communities that have experienced long periods of disinvestment and decay,” said EPA Administrator Michael S. Regan. “These assessment and cleanup grants will not only support economic growth and job creation, but they will also empower communities to address the environmental, public health, and social issues associated with contaminated land.”

Located at 163 W. Main St., the 33,000-square-foot Hotel Louise site was a hotel and a first-floor storefront until 1972, at which point its upper floors were repurposed for residential apartments and its ground floor was repurposed for commercial use. The building has been vacant and unused since 2010, and the EPA says it is contaminated with metals and inorganic contaminants.

The $500,000 grant will also be used to support community outreach activities, according to the EPA.

Since its inception in 1995, EPA’s Brownfields Program has provided nearly $1.76 billion in grants to assess and clean up contaminated properties and return them to productive reuse.

‘A beer for everyone’: New brewery opening soon in downtown Washington

There’s a simple motto at Two Rivers Alehouse. “The whole thing is we want everybody to be able to come... read more