‘A beer for everyone’: New brewery opening soon in downtown Washington 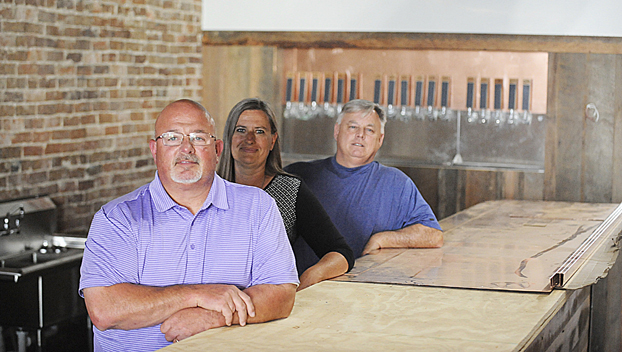 Front to back: Bubba Summerlin, Belinda Summerlin and Tim Jackson pose at what will soon be a finished bar inside Two Rivers Alehouse. The brewery is expected to open sometime around June. (Brandon Tester / Washington Daily News)

“The whole thing is we want everybody to be able to come in here and find a beer,” said Bubba Summerlin, one of the owners of the new microbrewery on Main Street. “Our motto is ‘A beer for everyone.’”

Located at 186 W. Main St. in downtown Washington, Two Rivers will open its doors around June. The menu will include around eight to 10 beers brewed in-house, as well as a selection of beers from other local breweries. Two Rivers will also offer what Summerlin calls an “appetizer, hors d’oeuvre-type menu” that includes meats, cheeses, chips and dips and other items. For non-beer drinkers, Two Rivers will offer wine and soft drinks as well.

“We are all about trying to build the community,” Summerlin said. “I feel like Washington has made a lot of good moves in the past few years, but I still feel like this is just the first step, the ground floor of what’s really going to happen with Washington.

“You come down here at nighttime, past 7 o’clock and it’s only one or two businesses open. We’re hoping that by us being here, and the Mulberry House, and the Hackney and other things going on over here, we’re hoping it will bring people down here more at night. So it’s not just a 9-to-7 downtown. We’d like to see it expand.”

Summerlin and Tim Jackson have been friends since childhood. They went through school together. They appeared in each other’s weddings. And they share an allegiance to their alma mater, East Carolina.

“So we know each other pretty well,” Summerlin said with a laugh.

Eventually, they saw an opportunity to go into business together.

“We’re both getting to a point where are careers, our main jobs are kind of coming to an end,” Jackson said. “We still stay busy at our current jobs, but we needed something to keep us busy and generate excitement, things to look forward to.  We are both from eastern North Carolina. We saw good things happening in the downtown Washington area. We saw that it has potential.”

Neither one of them had direct experience in the brewing industry, but they did have experience working in hospitality.

“(Bubba) has background, as well as (his wife) Belinda, in restaurants,” Jackson said. “And I’ve owned a business that had a restaurant in it too, or did food business. But this is our first time in brewing.”

When it comes to the building itself, the owners have turned what was essentially a barebones space into what will soon be a functioning microbrewery. They’ve reworked the electrical and plumbing systems, and they’ve constructed a walk-inn cooler, bathrooms and a kitchen. The brewing equipment will be installed at the rear of the building.

The owners said they’re bringing in the head brewer from another brewery to fill a similar role at Two Rivers.

“We have a small brewing system which will enable us to turn beers quickly,” Summerlin said.

Once it is installed, the Two Rivers equipment will be able to produce between 90 to 100 gallons of beer per batch.

“That allows you to be a little experimental,” Jackson said. “You’re not making 500 or 600 gallons of beer at a time — and if you don’t get that beer right, there’s a lot of waste in it. It allows you to test different beers as far as an IPA, a lager, a pilsner or pale ale, and all those types of things.”

“We have a brewery that has agreed to brew some of our beers, or recipes for us so we can go ahead and get them on tap when we open, while we’re using our equipment to brew,” Summerlin said. “So it would be our beer, our recipes that we’d be selling.”

For now, the location on Main Street will be the only place you’ll be able to find Two Rivers beers.

“We’re not looking initially at any kind of distribution where we’re getting out in the regional grocery stores,” Jackson said. “If we have one that makes a hit, then we may look to expand.”