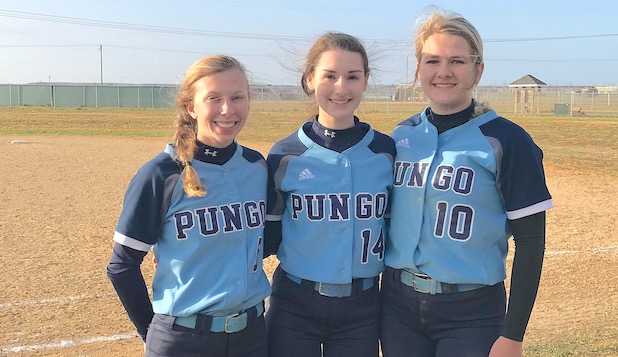 From left: Riley Cutler, Emma Williams and Lauren Kellie Ricks are among the most accomplished athletes in school history. (Contributed photo).

BELHAVEN — When the Pungo Christian Academy Lady Raiders made the last out of their NCISAA 1A state semi-final softball game against Cape Fear Academy Tuesday, it not only ended the season, but closed the curtain on an unprecedented run of success by the three seniors.

Riley Cutler, Lauren Kellie Ricks and Emma Williams were volleyball and basketball teammates since they were freshmen. Ricks joined Cutler and Williams on the softball team during the COVID-19 abbreviated 2020 spring season.

During that time, the Lady Raiders piled up three volleyball conference titles and a pair in basketball and softball.

After multiple trips to the state playoffs in all three sports, they capped their careers with trips to the volleyball, basketball and softball Final Four.

The trio was part of 186 victories during their time in the Lady Raider uniform and did not lose a conference game in any sport their senior year.

“These girls have done some amazing things during their time here,” softball coach Leigh Stoop said. “We were basically a 15-under junior varsity team without them this year. They were the best possible role models for the younger players. They never missed a practice and were always positive and encouraging to the younger ones. They were a pleasure to coach and all of us at PCA will miss them very much.”

Williams and Ricks plan to attend East Carolina University in the fall, while Cutler plans to go to N.C. State.

Several Lady Raiders took home post-season awards. Sophomore Reagan Stoop was the Tar Heel Independent Conference Player of the Year and conference tournament Most Valuable Player. Stoop batted .558 with six home runs and 22 RBI along with 83 strikeouts in 61 innings pitched with a 1.61 ERA.

Cutler and freshman Melanie Rutledge made the All-Conference team, while freshman Ginny Grace Pugh joined Ricks and Rutledge on the All-Tournament team.