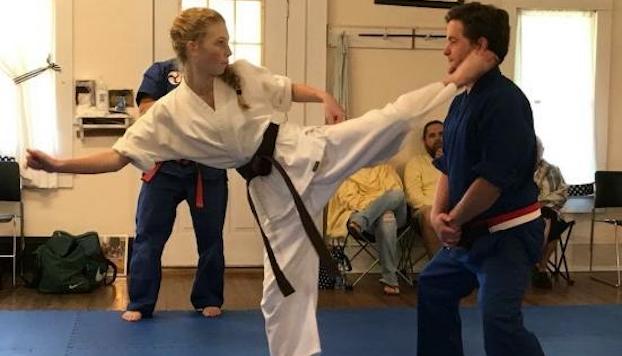 10-year old Leanna Hudson walked into the Washington Karate Academy dojo nervous and unsure of what was going to happen next.

Hudson’s rigorous route to her goal was one of hard work and self-discovery, which is part of the deal for those who choose to stick with it.

“Our students have to earn it and there are no short cuts,” Chief Instructor David Warren said. “It’s been seven years since a teenager was promoted to the junior black belt level. Leanna has worked very hard to earn her achievement.”

The rank is only in the traditional martial arts and is for kids between 12 and 15 years old. Hudson’s father, Lee, studied under Warren as a young adult and encouraged his daughter to at least give the sport a try.

“I was really overwhelmed and had no idea what was going on, but I liked it,” Hudson said of her first class. “It took a good two months to feel comfortable and my classmates encouraged me to stay with it. The older ones inspired me to work hard to improve and it’s worked out really well so far.”

Hudson’s test was two and a half hours long and covered vocabulary terms, the historical teaching lineage dating back seven generations along with fighting movements and techniques, hand technique and forms.

Mat and self-defense techniques were next, including throwing instructor Joshua Chandler all around the mat each time he grabbed, kicked or punched at her.

“It was awesome to watch her easily throw a man who outweighed her by 55 pounds,” Warren said. “I think her family was amazed she could do it.”

Next up was sparring six rounds against two opponents, then three.

The final phase involved a series of deep breathing exercises while Warren and Chandler punched and kicked her legs to try to disrupt her breathing and focus.

“Fighting and doing each segment without a break were the hardest parts,” Hudson said. “I knew the material and I had to stay calm and execute what I was taught. I was relieved and very excited when it was over and they told me I passed.”

Hudson plans to continue her studies and keep playing the saxophone in the Southside marching band.

“Karate has helped me become more confident in my everyday life,” Hudson said. “I’ve been able to focus better during my classes and it’s helped me stay patient when things aren’t going well. I’m going to stay with it and see how far I can go.”