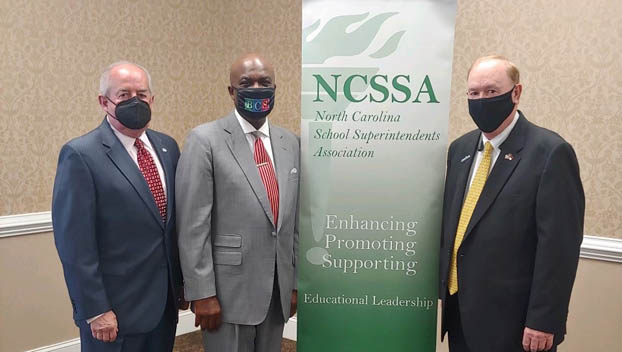 The North Carolina School Superintendents’ Association and the North Carolina Alliance for School Leadership Development have announced the selection of Marvin Bradley, chief operating officer of Beaufort County Schools, as a recipient of the Dr. Samuel Houston Leadership Award. This annual award is presented to a graduate of the NCSSA Aspiring Superintendent Program, a program that is designed to empower transformational education leaders for North Carolina’s public schools.

“I am truly blessed, honored and humbled for being acknowledged by my colleagues and the leadership committee of North Carolina School Superintendents Association,” Bradley said. “This recognition is the epitome of standards I have elected moving forward.”

The award is named in honor of Samuel Houston who is president and CEO of the North Carolina Science, Mathematics, and Technology Education Center.  Houston served as superintendent of the Mooresville Graded School District for 10 years where he opened the first year-round school in North Carolina. Houston also served as the first executive director of the University of North Carolina Center for Leadership Development.

Houston was awarded the Jay Robinson Leadership Award as an Exemplary Educator for his outstanding contributions to statewide public K–12 education.  He also earned the RJR-Nabisco Foundation’s China Breaker Award for implementing educational change. He has been inducted into the Appalachian State University Reich College of Education’s Rhododendron Society and the East Carolina University’s Education Hall of Fame and has received the Distinguished Career Award from the University of North Carolina – Greensboro School of Education.

In his current position with BCS, Bradley serves in a staff capacity to all administration in the district regarding all matters pertaining to operations. The COO oversees, supervises, and directs auxiliary service, school-nutrition, and transportation divisions of the district.

“Dr. Marvin Bradley supremely deserves the recognition associated with the attributes sought out for the Dr. Sam Houston Leadership award,” said BCS Superintendent Matthew Cheeseman. “Dr. Marvin Bradley has exhibited the leadership traits on a regular basis. I am proud of the accomplishments he has made throughout his career.”

BCCC Advising Center opens on May 17