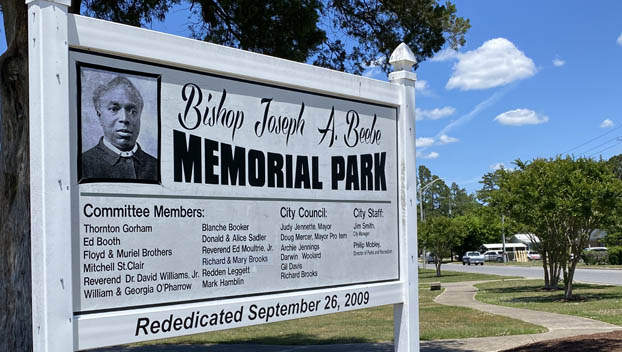 Beebe Park will be one of the final stops on the Freedom to Prosperity Walking Trail. (Brandon Tester / Washington Daily News)

A walk through history

Did you know that Fourth Street was once the hub of commerce for the Black community? Do you know the history behind “Teachers’ Row?” Want to know more about how the civil rights movement looked in Washington?

More information on those topics and many others will be provided along the one-mile-long Freedom to Prosperity Walking Trail, which is currently being developed by the Washington Human Relations Council and will be used for the first time during the city’s Juneteenth celebration. The trail is designed to educate people about the local history of businesses and education in the Black community. It starts on Main Street at the Underground Railroad Museum and ends at the P.S. Jones Alumni Museum.

Anthony Tyre, chairman of the Human Relations Council, spoke to City Council about the trail earlier this month.

“It is our desire to provide education on a lot of our county’s history by giving a clear snapshot to some of the things of the past that will help us learn — and not just for one culture, but for all cultures that live in Beaufort County.”

Along the way, participants will see various landmarks — churches, homes, businesses, schools and others — that help tell the stories of the Black community. For instance, the trail passes a transmission shop that was once the Old Lenox Theatre, which was the city’s Black movie theater. On another part of the trail participants will pass the Metropolitan AME Zion Church, which served as a forum for civil rights and voting rights battles, and also served as a school for Black students. Alice Mills-Sadler noted that the church houses the county’s oldest functioning pipe organ.

“We hope to have as much turnout as we can possibly get,” Tyre said. “But we also want to make sure everyone is safe along the route.”

The city will share more information about its Juneteenth celebration at a later date.