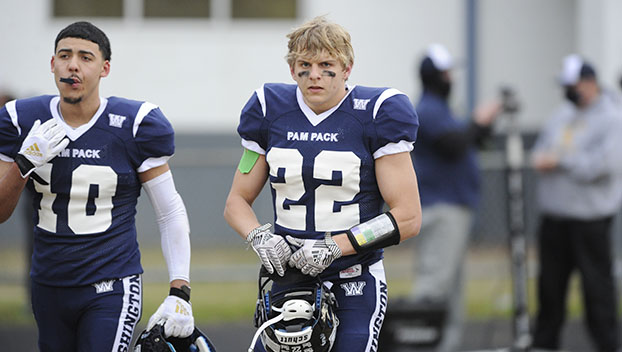 The back-to-back Eastern Carolina 2A conference champions were well represented on the All-Conference team with eight selection and four more honorable mentions.

Earlier, the conference announced WHS head coach Perry Owens as the coach of the year and junior running back Terry Moore as the player of the year.

“This just shows what kind of work our seniors have put in during their careers here,” Owens said. “They are a huge part of our rebuild from 4-8 their freshman year. They’ve handled the ups and downs of COVID-19 extremely well and have been great leaders for our program.”

Hambric finished with 1,113 rushing yards and nine touchdowns and will play at Saint Augustine College in Raleigh in the fall. Gerard led the Pack with 99 tackles including 21 for a loss. Swinson, who will play in the East-West All-Star game this summer and Davis opened plenty of holes for an offense that averaged 389 rushing yards per game.

Hill was a mainstay along the defensive front as was Spruill in the secondary. Anderson, who will play at the Coast Guard Academy and Rosario were sure-handed targets for Pippen when the Pack took to the air.

“I’m excited to have Hayes, Terry, Wheeler and Ryan back next season as we move into a new conference,” Owens said. “They will have a chance to pursue their third straight conference title on varsity after winning the JV championship as freshmen.”