Baseball Seahawks off to a flying start 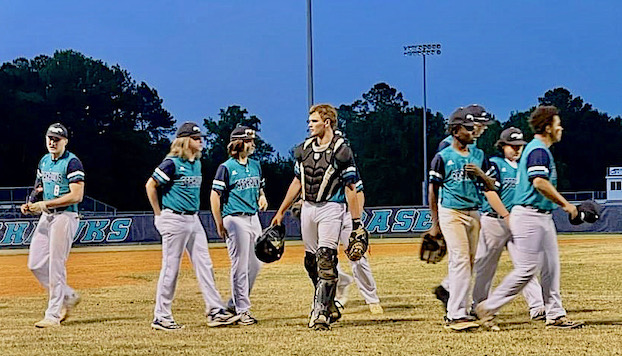 Southside players celebrate after a recent victory to keep them undefeated in conference games. (Submitted photo)

The Southside baseball team is in an unfamiliar spot halfway through the Coastal Plains 1A conference season-atop the league standings.

The Seahawks are 5-0 in league play, including 4-1 and 5-1 victories over traditional powerhouse Riverside, and are 8-0 overall.

Head coach Daniel Folk is in his second year, but only had his team for three games last spring because of COVID-19. He was an assistant in 2019 and has helped the program make progress.

“I have a high bar for practices and games,” said the 36-year old Shelby, N.C.native. “My hometown has hosted the American Legion World Series for a long time and I was fortunate to be part of successful programs at Crest (HS), Gardner-Webb and Surry Community College as well as Legion ball. The kids know they will get better if they put in the time and they have so far.”

Junior right-hander Matthew Bullock is 4-0 with a 1.75 ERA and 17 strikeouts in 20 innings. Stallings, senior Logan Langley, junior Bryan Gutierrez and Moore have the other pitching victories.

“We’ve been solid in all areas so far, including defense,” Folk said. “Tequan has been lights out at shortstop by making great plays that have saved some innings for us. Shawn has been terrific behind the plate and we’ve made the routine plays to limit big innings by the other team. We’ve been able to put the ball in play on offense and we are very aggressive running the bases.”

Stallings is wrapping up four years on the diamond and sees how much the program has improved under Folk.

“He knows how to correct our mistakes and help us get better,” Stallings said. “He’s made everyone on this team better since he’s been here. I’ve played baseball my whole life and our team is having a lot fun this year. The younger guys bring a lot of energy and everyone gets along really well. We want to be the first Southside baseball team to win a playoff game.”

Two games with Tarboro, one with Pamlico County and a pair against county rival Northside remain.

There is no conference tournament, so the regular season champ gets the automatic state tournament bid.

“That’s what we want, but I tell them we are 0-0 every day and let’s do what we can to win our next game,” Folk said. “I want them to keep their heads in it every day and focus on improving.”