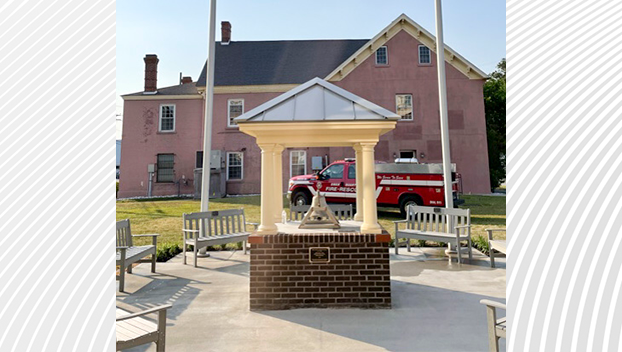 BELL COMES HOME: The century old cast iron bell is available for viewing and on display again at Watermen’s Park in Hyde County. It was used during the 1920s and 1930s to convene court, to summon jurors back to the courthouse after a recess or to signal an emergency in the community. (Photo submitted by the Swan Quarter Volunteer Fire Department)

The Swan Quarter Volunteer Fire Department thought they were just going to raise enough funds to build a display for the old Hyde County Courthouse bell that first hung outside the Historic 1857 Courthouse in Swan Quarter in the 1920-30s.

Built in 1920 in Chattanooga, Tennessee at the Ross-Meehan Foundry, the cast iron bell originally hung on a pole from a second-floor wooden landing outside the jury room outside the old courthouse in Swan Quarter. The bell was rung to convene court and to summon jurors back from lunch breaks or to signal an emergency in the community such as a fire. At the sound of the bell tolling, folks in the community would gather to hear important announcements.

Following the remodeling of the old courthouse in the 1960s, the bell had been relegated to the attic on the third floor of the courthouse. There it rested, unattended and unnoticed, until the 1990s when Merita Spencer and Pam Sawyer with the Hyde County Register of Deeds Office  discovered it. They ended up carrying it – donging it all the way down from the attic to the Register of Deeds Office on the first floor – so it would be safe. Several times their offices were relocated while repairs and painting were completed, and they took the bell with them each time. But after Hurricane Isabel in 2003, it went into storage again until the new courthouse was built. Once the new Hyde County Government Center was opened in 2007, they relocated it to their new office.

In 2018, the SQVFD presented a plan for a permanent display for the bell to the Hyde County Board of Commissioners. The plan was approved and a committee was formed. Fundraising began in earnest. But as projects sometimes do, the Hyde Courthouse Bell started to grow. One idea – for a time-capsule to be sealed inside the display and opened fifty years hence – was added.

“We wanted to preserve this bell because it is a part of Hyde County’s history. By including a time capsule in the plans, we realized that we’d actually be making history too. Those of us involved in this project won’t be here fifty years from now,” said Chief Jeffrey Stotesberry with SQVFD. “Some of our children and most definitely our grandchildren will be the ones opening the capsule. We hope they will have as much fun looking at the things stored inside as we have had compiling those items.”

Knowing that 8th grade students would be in their 60s and probably involved when it was time to open the capsule, Sandra Carawan’s class at Mattamuskeet School was asked to provide written answers to these two questions: what one item do you have now that you think may be still around in 50 years and why do you think that and what new invention do you think might be available in 50 years? Describe what it is, how it might work, who will the target audience be, etc. The thought provoking responses of twenty-five students who participated and also provided information about themselves are sealed in the capsule along with various other items from 15 other individuals and/or organizations. 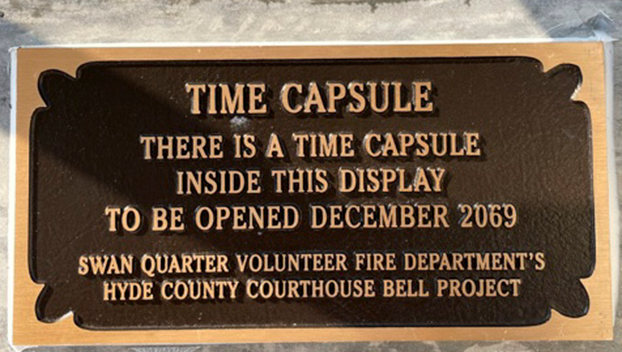 TIME CAPSULE: In addition to installing the bell, a time capsule was also interred at Watermen’s Park. Set to open in December 2069, the time capsule contains assignments completed by 25 8th grade students at Mattamuskeet School and additional contributions from 15 organizations or individuals. (Photo submitted by the Swan Quarter Volunteer Fire Department)

The display sits in Hyde County Watermen’s Park on the greenway between Hyde County’s old and new courthouses at 30 Oyster Creek Road in Swan Quarter. Scattered throughout the site are nine park benches, each bearing a memorial bronze plaque “In Honor Of” or “In Memory Of” a loved one. Stop by the next time you’re in the area and sit a spell.