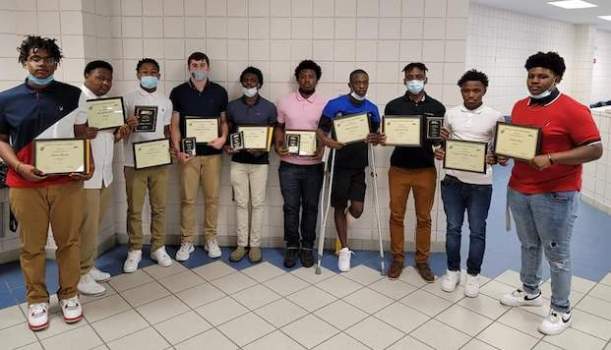 Carter led the team with 457 rushing yards and five touchdowns, while Coffield tacked on 381 with six TD’s.

Campbell and Cobb were defensive mainstays, while the 6’2 250-pound Moore anchored the offensive line.

“I thought we were well-represented in the All-Conference voting,” head coach Jeff Carrow, whose team finished 3-4 said. “The league coaches voted on this and they recognized that we had some talented guys.
Senior quarterback Hundley Stalling made the second team along with sophomore defensive lineman Elyjaih Baldwin and freshman defensive back Tequon Moore.

The Seahawks also handed out team awards at their recent banquet.

Carter was named the team Most Valuable Player, Coffield was the offensive MVP, while Campbell earned the defensive MVP. Stallings won the coaches award and Cobb took home the Seahawk award.

“They all deserved everything they got,” Carrow said. “Each of them were leaders, not only through stats, but in the locker room as well. They are a great group of guys on and off the field.”