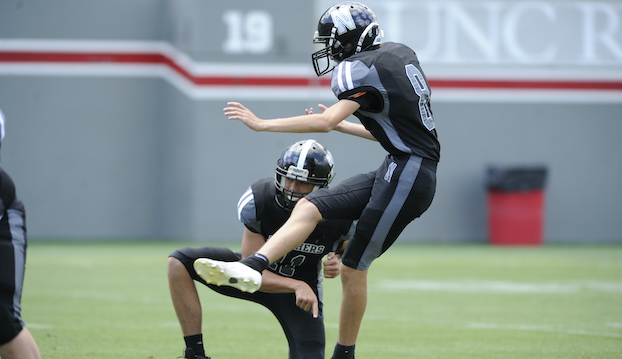 Eight members of the 1A East champion Northside football team were selected to the Coastal Plains 1A All-Conference team, while veteran head coach Keith Boyd was named Coach of the Year.

Gorham finished among the 1A state leaders with 1,473 rushing yards, 23 touchdowns and averaged 12 yards per carry.

The 6’2 230 lb. Taylor had a team-best 11 pancake blocks on the offensive line, while Tomaini made all five of his field-goal attempts and 38-44 extra- point kicks.

“It’s a big advantage when you have a kicker like Chase,” Boyd said. “He makes the math work out when the clock is running down before halftime or late in the game and you know you have somebody who can put three on the board. He gives us that cushion to fall back on, so we don’t have to go for it on fourth down all the time. His kickoffs forced our opponents to start deep in the own territory, which helped our defense.”

Boyd led the Panthers to an 8-3 season, an East regional title and the school’s first state championship game appearance since 1990.

“I’m honored to be recognized by my peers, but it’s a program award,” Boyd said. “We have a very supportive administration at Northside, I have a great coaching staff and players who are willing to put in the work.”

Seniors Tyler Harris (linebacker) and Sam Vansant (defensive back) made the All-Conference second team along with fullback Mitch Godley.