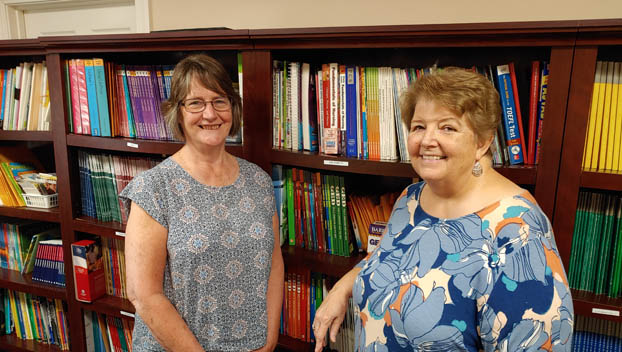 Program Coordinator Pam Deese, at left, and Executive Director Pat Lurvey, at right, posed for this photo with some of the countless resources they offer their clients -- all of which are at risk of elimination if the group does not soon receive an infusion of funds. (Karen Thiel)

If financial help doesn’t arrive soon, a local program that supplies help in everything from reading skills, math proficiency, GED preparation, English lessons, budgeting assistance and prison-based reading programs may have to close its doors.

Leaders at Literacy Volunteers of Beaufort County said this week that they are among the many nonprofit groups struggling as a result of a massive drop in funding, attributed to the financial challenges experienced by its loyal donors since the outbreak of the COVID-19 pandemic.

“Greenville’s office closed just this month. Their leaders called us to come over, check out their book supply and take what we wanted. I hated that for them. COVID was their last straw. It almost did us in as well,” said Pat Lurvey, executive director of Beaufort County’s chapter of Literacy Volunteers.

Lurvey said the trained volunteer tutors who serve the local branch, located on East 15th Street in Washington, never stopped working with their students when the pandemic forced so many changes on the region.

“We adapted. We incorporated CDC protocols,” Lurvey said. “We learned how to tutor using Zoom and other technologies. We have 14 students now, who have held steady along with their tutors, straight through all these challenges. And I’ve been busy applying for grants while they’ve been learning.”

Lurvey said she’s received small grants from two of the four applications she has submitted so far.

“Most of our real backbone has traditionally come from the United Way, but they haven’t had what they used to offer in the past,” Lurvey said. “In a good year we would get nearly $7,000. We received $350 last January and in April they couldn’t send anything. They’re suffering as much as everyone else.”

The group’s monthly budget of roughly $1,500 pays for rent, telephone, internet and insurance, as well as wages for Program Coordinator Pam Deese, who works a 16-hour week to keep costs down. Pandemic-related issues over the past year resulted in the cancellation of almost every fundraiser the group traditionally sponsors, including the popular and financially fruitful card party at Washington Yacht and Country Club.

Deese and Lurvey each became emotional as they contemplated the massive detrimental effects on Literacy Volunteer students if this branch has to close.

“We have one client who had never attended school, truly, never one day, and came to us for help,” Deese said. “He couldn’t read or add. He arrived just before the pandemic and, since then, has learned so much that he’s passed three out of the four tests for his GED. People come in here with little or nothing to help them, but they’ve reached a moment where they realize they need to do better. We cannot let his pandemic win and make us shut our doors on them.”

Anyone interested in donating or otherwise assisting the Literacy Volunteers’ fundraising efforts may contact the office on line at beaufortcoliteracy.org, via email at vliteracybcnc@gmail.com or by telephone at 252-974-1812.