Remembering those who died in service 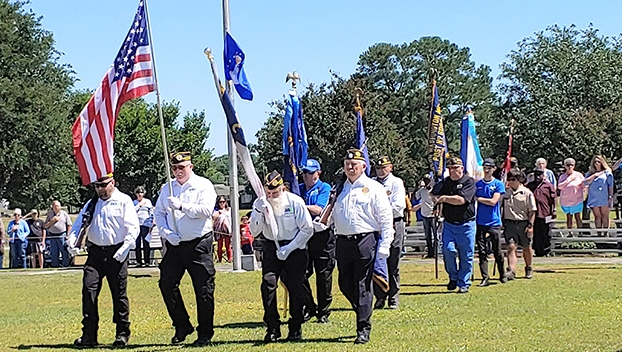 UNITY ON PARADE: Every branch of America's military was represented in this year's event, as well as the families they leave in order to preserve the freedoms they hold dear. (Karen Thiel / For the Washington Daily News)

It was a morning full of memories, stories, tears, hugs, laughter and more hugs in the early hours of May 31. Family members who gathered at Veterans Park on Monday shared war stories – real ones – about the loved ones they were there to remember, during a Memorial Day service organized by Beaufort County’s Chapter 48 of the Disabled American Veterans. 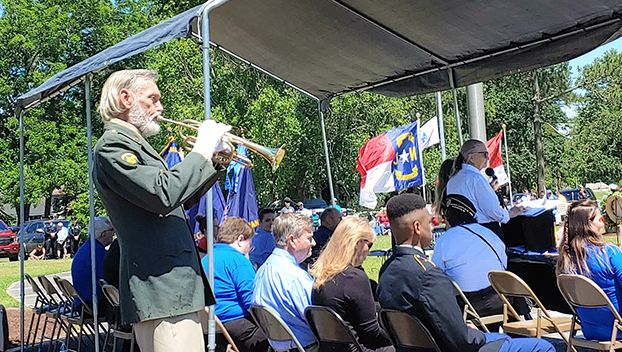 MOURNFUL NOTES: Vietnam War veteran David Flemming sounded ‘Taps’ as part of the morning’s standing-room-only ceremony, which was attended by about 150 people. (Karen Thiel / For the Washington Daily News)

Keynote speaker for the event was Beaufort County Veterans Service Officer Jennie Haddock, who encouraged vets and family members alike to keep alive the memories of American soldiers, to “have the same mindset of loyalty and patriotism for our country that they fought for. Keep the flame of gratitude bright,” she said, encouraging everyone to openly remember “their loyalty, valor and sacrifice and always have an example to pass down to our children so they, too, can understand and appreciate what love and duty for country is all about.”

Twenty-one fallen soldiers were honored, each with the solemn ring of a bell that drew new tears from the special seating section where members of Gold Star Families – who have lost sons, daughters, spouses and more because of wartime deaths – were given yellow roses for each military member being remembered.

Monday’s event also included presentation of the Honor and Remember Flag, recently approved by North Carolina’s senate and house of representatives along with 25 other states so far. The flag features symbols meant to be reminders of the sacrifices, purity and spirit of fallen soldiers as a “visible public reminder to all Americans of the lives given to preserve freedom… and a national symbol of appreciation recognizing the sacrifice of generations of fallen hero families,” according to the founding group’s web site. 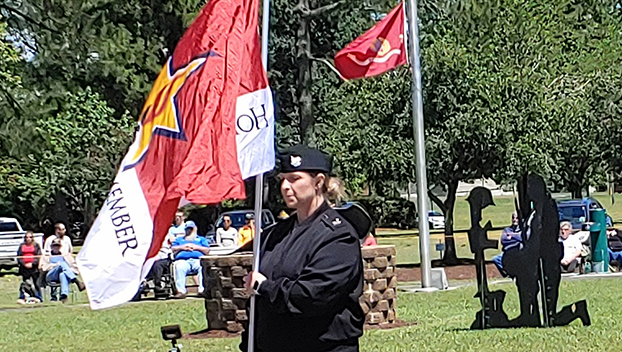 HONOR AND REMEMBER: The newly created Honor and Remember flag was formally presented at the event, carried by Kearah Williams, the latest member of her military family now on active duty. (Karen Thiel / For the Washington Daily News)

DAV Commander Juanita White said that, above all, she “loved the unity of all our veterans’ groups who participated, because we all have to work together to make this a better community for our veterans.”