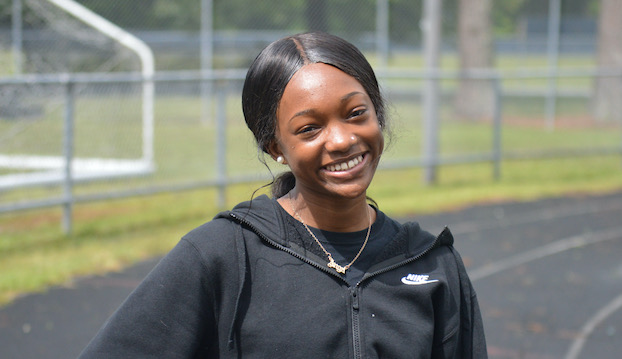 Kimaja Spencer will compete at N.C. A&T next year. She is the Washington High School record holder in the 400 meters and finished second in the state in that event as a freshman. (Steve Barnes/The Daily News)

Spencer will join an Aggies program that is ranked 13th in the latest women’s Division I track and field poll and will send nine athletes in six events to the upcoming NCCA national meet.

“I’m really excited to be part of such a successful program.” Spencer said. “It will be great to be around older runners better than me who will push me to work hard.”

Track and Field is one of the sports hit the hardest by COVID-19. The Pack ran one meet last spring with no post-season and this season was three regular season meets, plus the upcoming conference, regional and state meets.

However, Spencer caught the eye of several coaches from major programs with a 58.64 second time in the 400 meters this spring after a personal record 58.25 at the state meet as a sophomore.

“N.C. A&T is a great fit for Kimaja because she fills a need for them in the 400,” WHS coach Perry Owens said. “Their coaches told me she has a chance to compete as a freshman and fill a hole in a very strong lineup for them. She has worked extremely hard during her four years with me and I’m very proud of her and excited to see what she can accomplish.”

She’s won two 400 meter and a pair of 4 x 400 regional titles and has finished fifth in the long jump, fourth in the 4 x 400 and second in the 400 meters at the state meet. Her 58.25 time at the state meet is also the Washington High School girls program record.

She’s accomplished a lot in really only two years,” Owens said. “We’ve been fortunate to have runners like Nykaya Ebron (now running at Winston-Salem State), Ashanti Booth and Kizoria Redman who helped her develop and now she’s done a great job as a leader for our younger runners. Her grades are excellent (3.86 GPA), she has a great personality and she’s very coachable. I think she is going to do special things at A&T”

Spencer tried other sports growing up, but settled on track in 8th grade at P.S. Jones. After a successful spring, she decided to try it in high school.

“I was good at it in middle school, but didn’t take it seriously,” Spencer said. “But it was like the Big Bang Theory my freshman year when it all came together and exploded. That’s when I knew I could maybe run in college if I kept working.”

Spencer follows Allyson Felix and Sydney McLaughlin, both Olympians, and aspires to run in their shoes.

“I have high standards and know I have to work hard to get where I want to go,” Spencer said. “I can’t get there if I’m lazy. I like to compete and I know I have room to improve. That’s why I picked A&T. They see my potential and it’s the right place for me to reach it.”