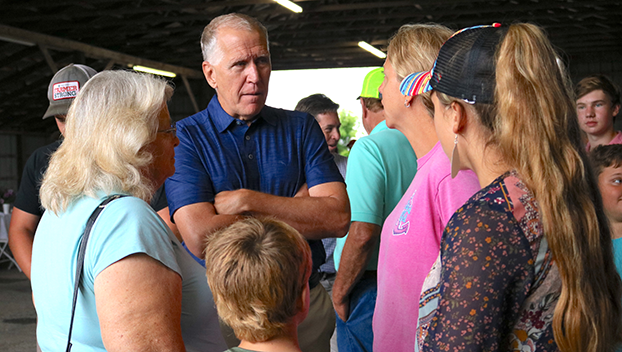 VISITING SENATOR: Sen. Tillis took time after the question and answer session concluded to meet with those in attendance to directly address any concerns brought to his attention. (Chelsea Hofmann / Washington Daily News)

Tillis addressed concerns related to infrastructure and commodities during an event hosted by Farm Bureau. Growers in Edgecombe, Pitt, Martin, Beaufort, Washington, Hyde, Tyrrell, and Dare counties gathered at the Coastal Carolina Gin in Pantego despite the threat of thunderstorms and severe weather in the area.

The event featured a question and answer session with the senator and those in attendance. Tillis spoke on the importance of supporting American farmers and the continuing need for agriculture workers.

“The problem that we have here is people are not going back to work,” Tillis said. “When we refused to renew those unemployment benefits (under the Obama administration), we were at 10.4% unemployment. When we did that, we also cut the unemployment benefits. Even after we got back under the national average of unemployment, we didn’t have agriculture workers. The other people’s solution is that they think that if you double wages and add benefits then all the problems will be solved. At what point do we have an industry that ceases to exist?”

Tillis also addressed international concerns related to China and the upcoming 2022 elections. He stressed the importance of bipartisanship when approaching issues relating to the ongoing political implications of exporting homegrown crops overseas.

“Every commodity that we grow in this country can be grown somewhere else and it would put us out of business. If COVID taught us anything, it’s that we have got a food supply chain that’s always at risk,” Tillis said. “If we end up building a food chain that’s largely reliant on farmers and fishermen outside of this country, the farms wouldn’t export when their own countries are struggling and our farms would be gone.”