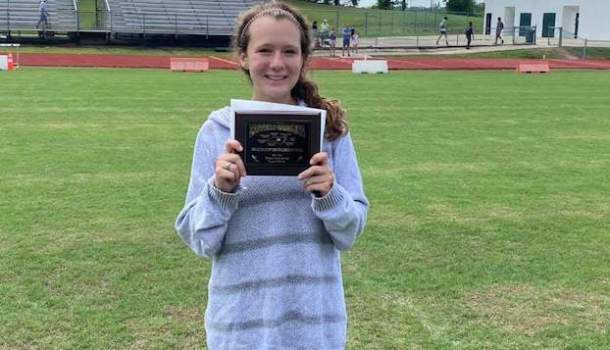 Freshman Hailey Broadwell earned girls MVP for runners in the Eastern Carolina 2A Conference meet Tuesday. She won the 800 and 1600 meters and finished third in the 3200. (Submitted photo) 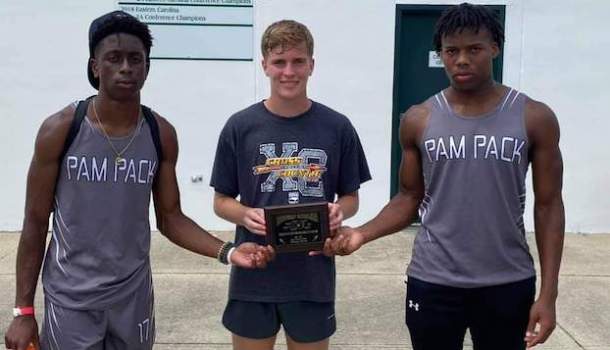 The Washington High School girls finished second and the boys fourth in the Eastern Carolina 2A conference track and field meet Tuesday in Kinston. The host Vikings won both meets.

Pam Pack junior William Reid won the 110 meter hurdles by a full second and finished the 300 hurdles two and half seconds in front. Senior Ethan Sommers took first place in the mile (1600 meters) by 14 seconds and won the two mile (3200) by over a minute. The pair earned co-Most Valuable Runner for their efforts.

“They both did a great job,” coach Perry Owens said. “Terry (Moore) was outstanding as well. Our boys team is young, but I liked the way they competed.”

Moore won the long jump with a leap of 19’11.5 and finished second in the high jump (5’8). The 4 x 200 relay team of Desmond Ward, Kentary Gibbs, Reid and Moore finished second.

The girls team battled to the final event, but finished four points behind Kinston. Freshman Hailey Broadwell earned MVP honors for the runners by winning the 800 and the 1600, while finishing third in the 3200.

Senior Kimaja Spencer won the 100 meters in 1:00, finished second in the 200 and fourth in the long jump.

Junior Faith Nellums won the high jump (4-10) and was part of the third place 4 x 100 relay team along with Kaitlin White, Princess Williams and Ornesha Norman.

Senior Jaidyn Fillingame took third in the 100 hurdles, while classmate Jada Powell was third in the high jump.

Cross-Country teammates Broadwell, junior Aspen Sommers and senior Chandler Woolard swept the top three spots in the 800, 1600 and 3200. Woolard won the 3200 and was second in the 1600.

“Hailey had a great day and has the potential for many more,” Owens said. “We’ve been fortunate to have several terrific runners on the girls team since I’ve been here and she’s the latest. Kimaja (Spencer) is graduating and going on to N.C. A&T and she’s helped Hailey and the other young ones get better.”

Next up is the 2A East Regional Friday at Croatan High School.