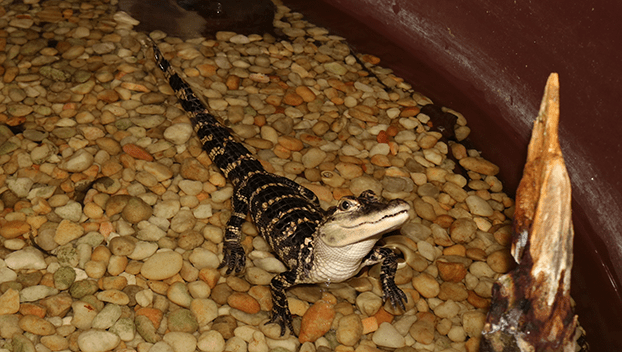 LOCAL RESIDENTS: This young alligator is one of two that currently reside at the North Carolina Estuarium. For more information on alligators, visit the N.C. Estuarium and see these two on exhibit. (Chelsea Hofmann / Washington Daily News)

Reports of recent alligator sightings have been on the rise, according to the North Carolina Estuarium.

“We have heard of a couple of recent alligator sightings,” said Tom Stroud, Director of the North Carolina Estuarium. “One in Jack’s Creek and another in the Moss Landing wetland, and staff here also believe we saw a smallish, maybe 3-4 foot, gator in the river in front of the Estuarium a couple of weeks ago but we are not 100% confident that what we saw was a gator. It was from a distance and could have been an otter or a nutria.”

American Alligators are a rare sight on the waters of the Pamlico River, but according to the North Carolina Wildlife Resource Commission, Beaufort County is considered part of the species’ territory. Alligators can usually be found in freshwater swamps, marshes, ponds, lakes and large rivers, as well as in brackish water and have been spotted along beaches in saltwater.

The months of May and June are typically considered the breeding season for these reptiles, meaning females will start to build their nests along the banks of Beaufort County waterways. If spotted, it is best to leave the animal be. Alligators are territorial in nature but rarely attack humans unprovoked.

The NCWRC has several pieces of advice to ensure any negative interactions are avoided:

Alligators typically feed between dawn and dusk. During the day, most gators can be found sunning themselves. In North Carolina, it is illegal to feed, harm, harass or poach an alligator. Avoidance of these animals is encouraged, but if an alligator is spotted in a residential area and may be in harm’s way, contact the NCWRC and an authorized Commission employee or licensed agent will remove the animal legally.

For more information on alligators, visit the North Carolina Estuarium’s exhibit on the animals or contact the NCWRC.