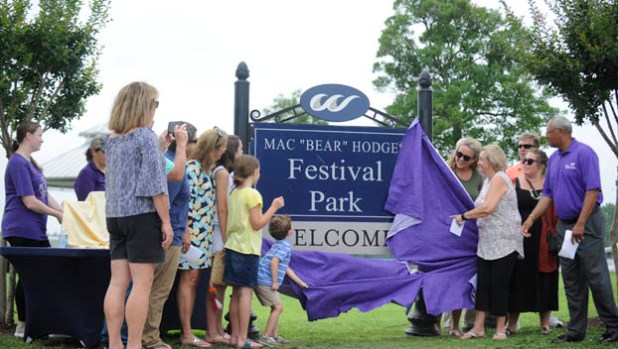 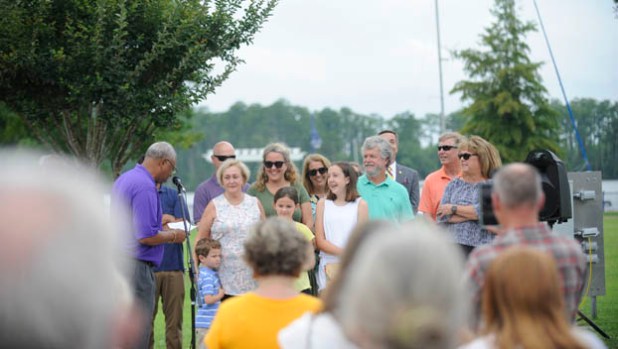 A large crowd gathered on the Washington waterfront Friday for the dedication of Mac “Bear” Hodges Festival Park, which was renamed for Washington’s beloved mayor who died from complications of COVID-19 last August.

The park is located between the North Carolina Estuarium and Captain Cooks restaurant. City officials and family members noted that the park was a fitting addition to Hodges legacy.

“He was a big fan of the park, a big promoter of making this happen, to have this green space here for everyone to enjoy,” City Manager Jonathan Russell said. “To have future concerts or different things at this venue — it’s something he took a lot of pride in.”

Hodges and his wife, Lou, lived in an apartment that overlooks the park. Mayor Donald Sadler said Hodges was always happy to see families utilizing the space.

“He was very proud of this park,” Sadler said. “He worked very hard to preserve it.”

“It’s a huge loss for the community,” Russell said. “We’re remembering him fondly in a number of ways in the community. His legacy will live on.”

People came from Beaufort County and beyond to honor Hodges on Friday. After some brief remarks, Hodges’ family unveiled the park’s new sign, which is easily seen from East Water Street.

“This shows the love and support he has throughout the community,” Sadler said. Not just in Washington but out in the county, and he had some friends travel in from outside the county.”