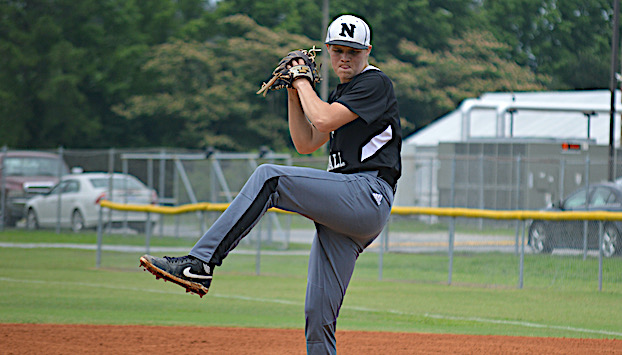 Senior Ryan Cornelius pitched a complete game against Tarboro to give the Panthers a shot at a playoff berth. (Steve Barnes/Washington Daily News)

Northside broke open a 2-1 game with nine runs in the bottom of the 6th inning to defeat Tarboro 11-1 and keep their post-season plans alive.

The Panthers are 5-5 in conference play, tied with Riverside and Southside for second place. Tarboro has already clinched the league title and automatic playoff bid.

Northside swept Southside and split with Riverside, so they won’t know their fate until Sunday.

“We did our part,” coach Keith Boyd said. “We took advantage of some errors and had a couple of key hits in the last inning. You never know with this group, but they like to compete. We’ll take it any way we can get it.”

Northside sent 12 men to the plate in the 6th and had four of their six hits during the frame.

Caleb Alligood led off with a single to left field, Tyler Modlin reached on a squeeze bunt that brought home a run, Eli Huynh smacked a two-run single to left and Ryan Cornelius did the same to right field later in the inning.

The Panthers also took advantage of five walks and three errors during the rally.

Cornelius pitched a complete game two-hitter with eight strikeouts to earn the win.

“He was as good today as he’s been all season,” Boyd said. “We’ve given ourselves a chance to keep playing and we’ll see what happens.”