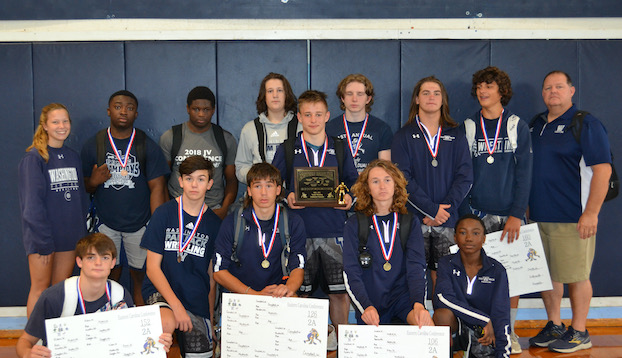 The Washington High School wrestling team won the conference championship for the seventh straight year earlier this month. They will compete for their third regional title in seven years Tuesday. (Submitted photo)

Team scores will be kept and the top four wrestlers in each class will advance to next week’s individual state tournament.

However, there won’t be any team scores kept at the state meet because of COVID-19.

The Pack has two top-seeded wrestlers in the regional, but only one will compete. Junior Zack Warren earned top billing in the 113 lb. class, but injured his knee over the weekend and can’t compete.

Senior Tristen Nixon is the top seed in the 152 lb. division.

Freshmen Braxton Woolard (106) and Bryant Smith (145) are seeded second along with junior Isaac Campbell at 126.

Freshman Wyatt Campbell is the 9th seed at 132 and senor Davion Coward, who missed the regular season with a broken ankle, but earned points by being a state qualifier last year, is seeded 13th at 160.

“I’m proud of our freshman for their hard work and disappointed that Zack Warren won’t get to wrestle,” coach Chris Penhollow said. “It’s good that Davion will get to finish his career on the mat and the others have had good years also. We have a chance to get several state qualifiers from this meet, so we’ll see what happens.”