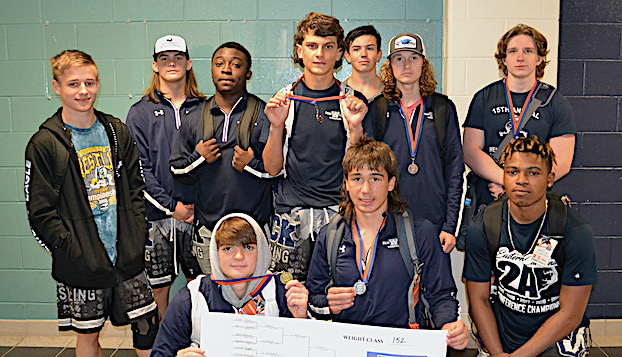 Five of the 10 Washington High School wrestlers who competed at Tuesday’s East regional meet at Croatan High School advanced to next weekend’s 2A state tournament.

Senior Tristen Nixon was the top seed in the 152 lb. class and claimed the regional title with a pin of his Currituck County opponent in the final match.

However, he almost didn’t make it that far.

“He was on his back for a good minute in the quarter-finals and his career could have been over right there,” coach Chris Penhollow said. “However, he battled back to get the win and ended up taking the whole thing. I’m proud of his effort.”

Junior Isaac Campbell was the second seed at 126 and lost for the first time all season to a Currituck opponent in the championship match.

“He had a tough draw, but did the best he could,” Penhollow said. “The Currituck guy will probably be the top seed in the state meet, so Isaac won’t face him again until the state championship match.”

“I am really proud of Adam for working hard and earning his spot at state,” Penhollow said. “He was behind two older guys in his weight class on our team and didn’t start until his junior year. He stayed with it and it paid off this year. He’s a great kid, very coachable and I told him he will be a state qualifier for the rest of his life. It’s a great accomplishment and he earned it.”

The top four wrestlers in each weight class advanced to the 2A state tournament, held this year at Wheatmore High School in Trinity, NC. It’s usually at the Greensboro Coliseum with all four classifications wrestling together, but COVID-19 forced the state association to separate into four venues.

There will be no team points kept at the state meet, with only individual state titles up for grabs in each weight class.