Midwestern birds-some different, some the same 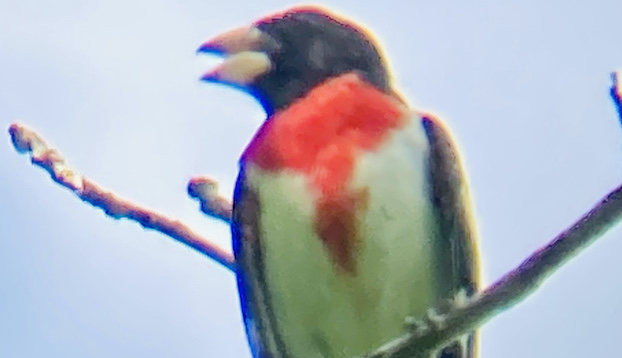 This past week I visited some family in the Midwest, traveling to the northern-tier states of Minnesota and Wisconsin. You can always observe birds and this trip was no exception.  My cousin who birds made an excellent guide on picnic outings and the rest of the family was very patient with us as we stopped to watch or listen along the way.

I have spoken in this column many times of bird species that pass through our area during spring migration, then move on to breeding habitat in more northerly areas. In late March I wrote of an “accidental” Dickcissel (migrating off the usual course) that appeared in my yard briefly.  I was totally unfamiliar with this species until I photographed it in the yard at that time.  But last week, I saw several more Dickcissels in grassland preserves where they nest.

Imagine what it takes for this sparrow-sized singer to travel so far.  For me, three jet flights and most of a day were necessary to cover the more than 1,100 miles between Washington and Minnesota.  The tiny bird will migrate four times this distance – from the Midwest, to Central America or South America — twice a year, for its entire lifetime.  Take a look at the map to visualize its incredible journey:  https://www.allaboutbirds.org/guide/Dickcissel/maps-range

In addition to the Dickcissel, I saw several other birds in Midwestern breeding habitats which stop in N.C. only briefly during migration.  These were Rose-Breasted Grosbeak, Baltimore Orioles, Yellow Warblers, and American White Pelican.  The Rose-Breasted Grosbeak held still long enough for me to take this photo.  My Minnesota cousin says it sings like a Robin that had voice lessons.

A nice thing about birding the upper Midwest is that they use the same bird book as our region (eastern birds), with about 80% of the birds familiar to us here – but about 20% are unfamiliar due to the difference in climate and habitats.  This offered just enough variety to be fun and a little challenging, but not too frustrating!

So, in the Midwest, you can go for a walk and see a lot of the common summer birds that you’d expect to see here:  Blue jays, Indigo Buntings, Cardinals, Catbirds, Robins.  But, no Mockingbirds – and no Carolina Wrens!  Instead, they have House Wrens.

You’ve heard me talk about “life birds,” and I added six species to my life list on this trip:  Trumpeter Swan, Yellow-Headed Blackbird, Willow Flycatcher, Warbling Vireo, Clay-Colored Sparrow, and Peregrine Falcon.  Each of these would be difficult to impossible to see in North Carolina, so I was super-excited to have a chance to find them on a family vacation.

Betsy Kane is a Washington resident who enjoys the outdoors.