AOP returns to the stage with “Mamma Mia” 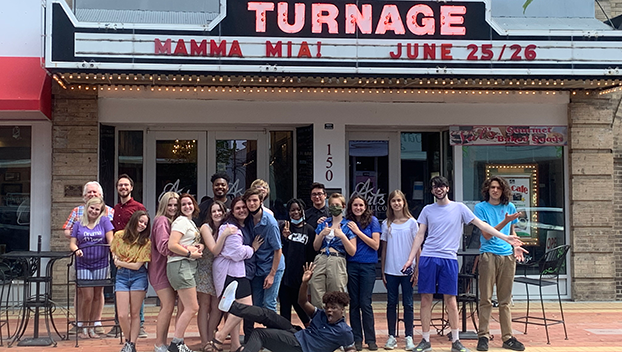 LIVE SHOW: The students in Arts of the Pamlico’s Broadway Teens Camp will be putting on a production of Mamma Mia on June 25 and 26. Tickets will be available at the door for $5 cash or $6 with a credit card. (Photo submitted by Debra Torrence)

The Turnage Theatre is hosting the first performance since its closure in March of 2020 due to concerns regarding COVID-19.

The cast is made up of the teenagers involved in Arts of the Pamlico Broadway Teens Camp. These camp participants range from 13 to 18 years old and will be performing the hit Broadway musical “Mamma Mia” after rehearsing for three weeks at the Turnage Theatre.

Director Rachel Issac has previous experience leading the similar program, Broadway Kids Camp, but this is her first foray into working with the older group.

“It’s different with teens because with little kids, you do simple dances and they all usually sing one part whereas the teens want to do something a little more exciting and fun,” Issac said. “It’s been a little bit of a challenge to combine everything and do it fast enough to make sure they understand and remember the dances in the short period of time we have.”

The three week camp held auditions on the first day of camp and began working on blocking and learning songs on the second day after the cast list was announced. Since then, the cast has been learning the dances for all of the musical numbers in the show and putting their singing and acting into practice for the live performance.

“It’s nerve wracking to say the least. In a professional theatre setting, they have four weeks to learn everything and they’re just teenagers in high school and they have three weeks,” Issac said.

This is the first performance these teens will have in front of a live studio audience since before the COVID-19 pandemic began last March.

“I’m really proud of these students. I am the theatre teacher at D.H. Conley High School and most of these students have come from D.H. Conley or have just graduated. Some are locally here in Washington that have been in the children productions that are old enough to be in the teen program,” Issac said. “Even though they’re all slightly different ages, they all get along great. They’re all friends and they all want to hang out. They’re so excited about this show.”

The teenagers in the show all shared the same enthusiasm about putting on a production like this.

“I’m really grateful to work with a cast that’s always centered. I think it’s also great that we all have our moments where we aren’t focused because there’s got to be some light to the hard parts. This is a good group of kids,” said Elizabeth Torres, who plays Donna Sheridan.

“This is an extremely positive environment. Never once have I come in here and felt like if I cracked on a note or tripped up a dance step, that the people around me were going to laugh at me or judge me. They always help me through the difficult moments as much as they help me celebrate the moments that I did well,” said Emily Speakman, who plays Rosie in the show.

“It’s also a very emotional show because we’ve all been doing shows since we were freshmen together so this is our last one,” said Jaylen Godley, who plays Harry Bright in the show.

“In the words of Harry, this is our last summer,” Torres said.

Three shows will occur next weekend, with opening night being held on June 25 at 6:30 p.m., a matinee performance at 1:30 p.m. on June 26 and an evening performance at 7:30 p.m. that night. Tickets will be available for purchase at the theatre and will cost $5 in cash or $6 if using a credit card.