Beacon Street to develop in Belhaven 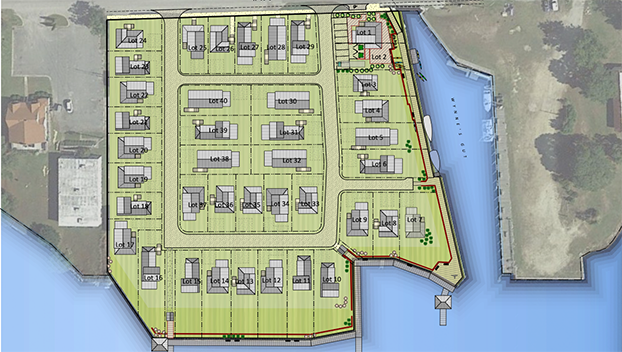 APPROVED PLAN: The approved plan for the new Beacon Street Development community in Belhaven includes 40 lots and boat slips for every resident. Lots 1 and 2 are being considered for a possible commercial development and the proposed layout is subject to change as work progresses. Construction is expected to begin at the end of the year. (Photo submitted by Beacon Street Development)

“Beacon Street likes to really work on what we think are the most important properties that need redevelopment. To me, this is a key property for Belhaven and it’s really important that it be done right. It’s going to be an asset to the community and added in a way that it feels like it’s true to the context of the rest of the town,” said Jim Wiley, president of Beacon Street Development. “Like Moss Landing, we just want something that fits in and adds some vibrancy to the town and something that people are glad that it got developed versus disappointed.”

The property once housed the Vidant Pungo Hospital until its closure in 2014. The hospital was demolished in 2016 and the lot at 202 E. Water S. has remained vacant since the demolition. During Monday’s Board of Aldermen meeting, the town council approved the proposed site plan put forward by Beacon Street for a development to be built on this lot.

“This town council approval really gives us the authority to build what we’re envisioning. There are some permits that we have to do going forward but the other side of it is the CAMA permit that is in process now,” Wiley said. “We hope that it will be wrapped up in the next few months and our hope is to be in position by the end of the year to start work.”

The proposed site plan has broken down the site into 40 residential lots, and includes a marina for residents with boat slips for each lot. In addition to these dedicated docks, a kayak launch will also be installed and a boardwalk will be built along the outer edge of the development.

“We’re looking at lots 1 and 2 as a potential place for a commercial gathering spot, whether that be a seasonal restaurant or something of that nature. We’re asking ourselves if there is something that Belhaven would love to have that feeds off of what’s going on downtown already,” Wiley said.

Wiley estimates that the homes will be similar in size to the homes in the Moss Landing community in Washington. The homes in Moss Landing offer two to four bedrooms per home and emphasize the outdoors with open porches and large windows.

“This is going to feel like a little coastal village and we’re going to be really focused on the architecture fitting in. These are going to be people who want to be outside and near the water, so the emphasis will be on what you get outside your homes as well as what’s inside,” Wiley said. “I think the homes will be coastal and beautiful and follow the style of Belhaven while also focusing on simple living.”