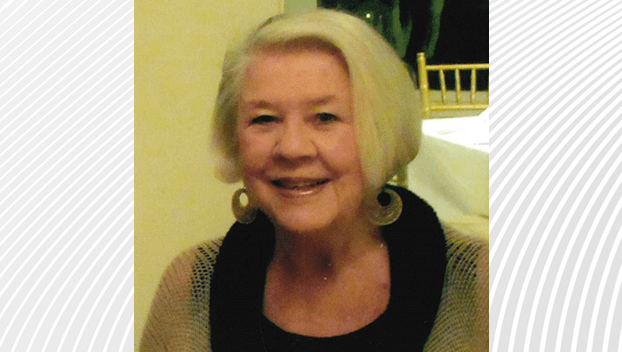 Cindy Davis, age 80, a resident of Greenville and former resident of Washington, NC died Monday June 21, 2021 at her home.

A memorial service will be held 4:00 PM Friday June 25, 2021 at First Baptist Church and will be officiated by Dr. Greg Barmer.

Cindy Davis was born in Asheville, NC on January 23, 1941 to Eulalia (Biddie) and Jim Atkins. She grew up as an Air Force brat and traveled most of those years, but always coming back to Kenly, NC with her Mom when her Dad would be stationed somewhere family could not go. Her love for eastern North Carolina started in those years. She met and married Luther J. Davis, Jr. at Whiteman AFB, Missouri, and they moved to Elizabeth City, near Luther’s home. In 1966 they moved to Washington, NC where they made their home for most of the next 50 years.

They raised their three boys there and Cindy was very involved with the PTAs at various schools and the Beaufort County Community Concert Series. While working with both of these groups, she started a fund to air condition the old high school auditorium so audiences could be more comfortable for high school programs and concerts. After moving to Magnolia Shores she helped the county pass the first city water ordinance by volunteering to contact over 250 home owners in the district.

She was active in the First Baptist Church and the Washington Women’s Bible Study. A life changing experience was the Emmaus Walk. Other interests included helping her son, Doug, start the Washington Racquet Club and she spent 14 years working with getting the Turnage Theater reopened. After her first bout with cancer, she worked as a volunteer in oncology for several years enjoying helping those wonderful doctors and nurses as much as possible.

Enjoying the Pamlico River was a continuing highlight of her life along with feeling “at home in Washington”. The hard decision to leave the river and the town to move to Cypress Glen in 2015 was made due to health reasons, but she felt she was “walking with the Prince of Peace” and was very happy in the new environment and making new friends. She also had wonderful times at Atlantic Beach and Blowing Rock with family and friends.  Later in life she was introduced to duplicate bridge after her tennis and walking days were over, she enjoyed that new challenge along with swimming and doing water aerobics.

She is survived by her loving husband of 58 years, Luther J. Davis, Jr., sons, Doug Davis of Pinetown, Josh Davis and wife Jen of Raleigh, Jim Davis and wife Charlotte of Spartanburg, SC, grandson Craig Davis and wife Lindsay of Washington, great grandsons, Tres and Liam, grandson Will Davis of Pinetown, grandsons, Luke Davis, Noah Davis and granddaughter Isabel Davis of Raleigh, and grandsons Layton Davis, Asa Davis, Jackson Hall, and granddaughter Maddie Hall of Spartanburg, SC. She was preceded in death by both her parents and brother, Jim Atkins of O’Berry Center in Goldsboro.

In lieu of flowers, memorials may be made to First Baptist Church and the Turnage Theater in Washington.

Paul Funeral Home & Crematory of Washington is honored to serve the Davis Family.