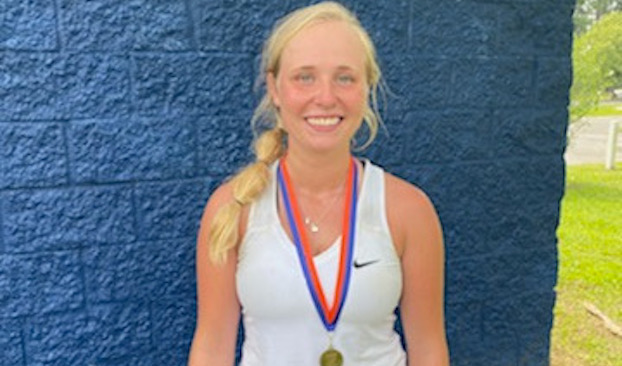 She tagged along to practice with a friend in the fall of her sophomore year and ended up playing on the team. She quailifed for the 2A state tournament as a junior last year, then swept three matches at Greene Central High School Saturday to win the East regional title.

Holscher also was the conference individual cross-country champion this year, but the team couldn’t run at the state meet because of COVID-19 contact tracing issues. She started on the basketball team and was a softball regular before the tennis season started.

“It’s been a weird senior year, but it’s been fun playing four sports,” Holscher said. “Olivia Paszt is a good friend and it’s been fun to play each sport with her.”

It was enough to earn the Pam Pack second place as a team behind the host school.

The format is the same for the 2A state tournament at the Cary Tennis Park in Cary, N.C. Holscher will play an opponent from Lake Norman Charter in Friday’s first round in the first of two potential matches that day. The semi-finals and finals will be Saturday.

“I know the competition is tough outside the East, but I have more power on my serve and more spin on my second serve,” Holscher, who lost her first match last year, said. “I know what I’m facing since I was there last year, which will help. My placement is good and I’m always working on my conditioning, so playing long points works in my favor. It’s exciting to be there again this year.”