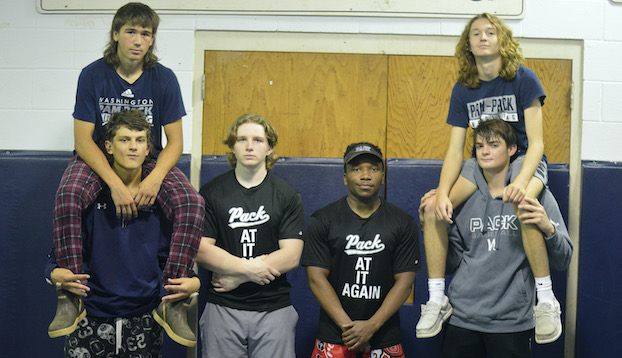 The five Pam Pack wrestlers who will compete in Saturday’s 2A state tournament at Wheatmore High School in Trinity, N.C. have a laid-back, yet serious approach to the event than will end the strangest season their sport has seen in North Carolina.

COVID-19 concerns forced the usual dead of winter sport to a mid-April start. Gone were the multiple weekend tournaments that pushed the season match total to near 50, yet there was a season and theirs was one of the few sports in which participants didn’t ever have to wear a mask.

Senior Tristen Nixon won the East regional title in the 152 pound weight class and is the top seed in Saturday’s state tournament. Junior Isaac Campbell is the second seed at 126, while freshmen Bryant Smith (160) and Braxton Woolard (106) are third seeds. Senior Adam Bonner is fourth at 195.

This is Nixon’s third time at the state meet, Campbell’s second, while Bonner made it for the first time as a senior.

“He’s worked really hard and deserves his spot,” Nixon said. “He’s a good guy and a great teammate, so we are looking forward to watching him do well.”

The event is normally held at the Greensboro Coliseum with all four classifications going at the same time in front of thousands of fans. 10 matches at a time will be cut to three or four, but the event that starts at 9 a.m. is not supposed to end until late in the evening.

“It makes for a long day if you lose your first match, because that’s it.” assistant coach Austin Coward said. “You have to win once to get into the wrestle-backs if you lose later. These guys have worked hard, so we’re in a good spot.”

Even though the atmosphere won’t be as electric, all five say the crowd will still be a factor.

“I’m excited to experience it for the first time,” Bonner said. “I’ve heard about it since I started here and it will be fun to finally be part of it.”