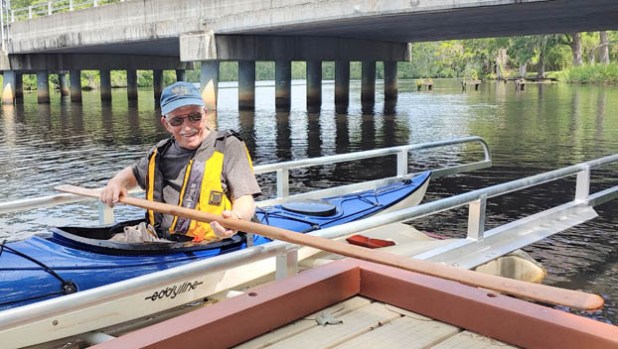 Washington resident Guy Blackwell used slow and steady movements, as he became the first kayaker to launch from the new accessible kayak launch, the second of three being installed through the efforts of Sound Rivers. (Karen Thiel) 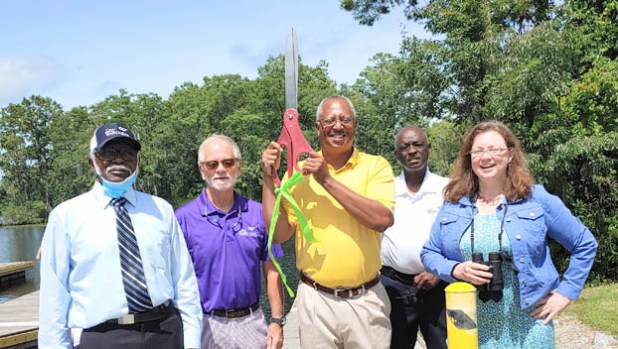 Guy Blackwell will tell you kayaking adventure stories for as long as you choose to listen, and now has a new one to add to his collection.

He just got to initiate the newest kayak boat launch in town, at the Mason’s Landing Boating Access Area on Tranters Creek Road.

This is the second of three such projects intended to provide greater public access to local waterways. The first dock completed is located at Havens Gardens. The third will be at Court Terminal in Greenville. The project is the result of a partnership between Sound Rivers and the City of Washington, paid for with funds from the state Recreational Trails Program, Division of Water Resources, Wildlife Resources Commission and the city.

“Beaufort County has the most paddle-friendly shoreline in North Carolina, hundreds of miles of river access as well as a large paddle community in Washington as well as statewide. Many of those folks are older, and it’s challenging to get into and out of a raised dock while the kayak is sitting several feet below,” said Clay Barber, Sound Rivers’ environmental projects coordinator. “We are trying to increase recreation access for them with these universally accessible boat launches, save a lot of wear and tear on their kayaks and simplify things on busy days when motorboat owners are also using the docks.”

After his inaugural slide into the Tar River and a brief ceremonial paddle for happy onlookers, Blackwell said this may be one of the best days he’s had since he took his first paddle boat ride at 9 years old.

”I’ve traveled all over the Unites States and Canada, but it’s not the same without Alice,” said the 72-year-old kayak enthusiast, referring to the physical challenges that have kept his wife, Alice, from enjoying the kayak trips she has loved taking with him for more than 30 years. “Without a handicap accessible ramp, she couldn’t come with me. But with this new launching arrangement and a tandem kayak we just tried out, she will be able to get back on the water.”

Barber said his happiness about Alice being able to get back to paddling is almost as strong as the joy expressed by her husband, who has been a Sound Rivers volunteer for about 14 years.

“That man can out-paddle me any day of the week! He is a paddle machine,” Barber said of Blackwell. “He and Alice are the perfect reason for this project, and reflect the value in increasing paddle access to these waters. It’s also bringing a good economic, environmental and public health impact to town, so this is a win-win-win.”