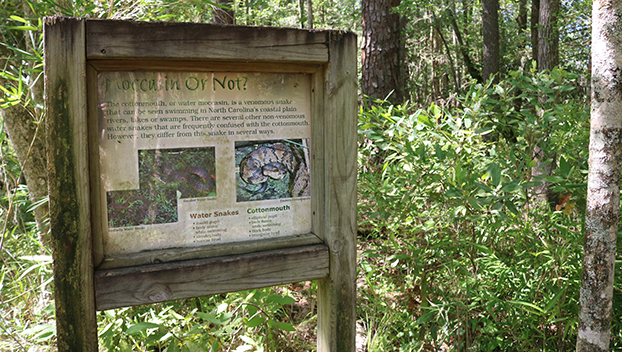 IDENTIFYING SPECIES: Signs like this one along the boardwalk trail at Goose Creek State Park help to explain the difference between the Cottonmouth, the only venomous water snake native to North Carolina, and harmless water snakes like the Banded Watersnake and the Rainbow Snake. (Chelsea Hofmann / Washington Daily News)

As the weather gets warmer, venomous and nonvenomous snakes alike will begin to appear throughout Beaufort County

According to the Carolina Herp Atlas, 25 different species of snakes have been observed in recent years across Beaufort County, with dangerous species like the Timber Rattlesnake having a documented sighting within the past two weeks. The Carolina Herp Atlas is a specialized reporting tool developed by the Davidson College Herpetology Laboratory and Davidson College Information Technology Services as a way of tracking and providing data on the distribution of reptiles and amphibians throughout the Carolinas.

“Whatever you do, don’t try to kill a snake — the majority of bites occur when people try to kill a snake or pick it up,” said Jeff Hall, a wildlife diversity biologist with the N.C. Wildlife Resource Commission. “While it can be startling to encounter a snake in your backyard, it’s important to remember that most of the snakes people see in their yards are harmless and non-venomous.”

The NCWRC offers these tips to homeowners as a way of discouraging snakes from taking up residence in and around residential properties:

For more information about the snakes native to Beaufort County, call the NCWRC’s Wildlife Helpline toll-free at 866-318-2401.