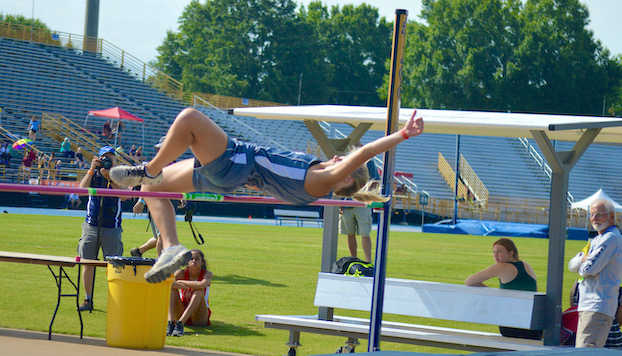 Slade was one of three jumpers who had cleared five feet in last weekend’s regional meets around the state, but missed on her first two attempts at 4’8. With her career on the line, she cleared the bar on her third try to stay in the hunt.

“It was just weird with other races going on and lots of people milling around,” Slade said. “I was just off and a little nervous, but coach Bob (Girani) calmed me down while I was waiting for my last jump. He told me to relax and it got easier after that.”

Slade cleared at 4’10 and 4’11 to clinch a spot on the medal stand, but the title came down to the last jump at 5’0. She had missed more than her competitor from Princeton High School in previous rounds and would have finished second if she missed on her final try.

“Coach Bob told me to drive my leg and push up, so I did,” Slade said. “I was praying I would make it over and the bar didn’t move. I’ve played volleyball and softball my whole life and it feels so strange to win a state championship in another sport.” 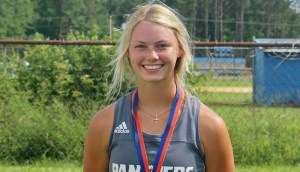 Senior Kathleen Slade won the high jump at the 1A state track and field meet Friday at North Carolina A&T in Greensboro.

Slade played both sports throughout her time as a Panther, but in this very odd high school sports year, she finally had the opportunity to join the track team.

The softball season ended earlier than usual because of COVID-19, and after not-so-subtle encouragement from Girani and classmate Caroline Boyd, Slade joined the track team.

“I did the high jump because Coach Bob told me it was my event,” Slade said. “I had never done it before a couple of months ago. He taught me the fundamentals and encouraged me to keep practicing. He’s a great coach and a great person and I couldn’t have done it without him.”

Girani saw something special in the senior, but didn’t expect her to take it all the way so quickly.

“She’s a very good athlete, but it’s quite the miracle,” he said. “She picked up the basics quickly and we’ve been tweaking things for the last couple of meets. Once she calmed down, I knew she was going to be okay. I am so unbelievably proud of her. It’s a tremendous accomplishment for anyone to win a state championship in any sport, but to do it with two months of preparation is truly amazing.”

Slade was the only Panther or Southside athlete to bring home a medal from the state meet.

Check back later Friday on thewashingtondailynews.com for complete results and photos from both schools.