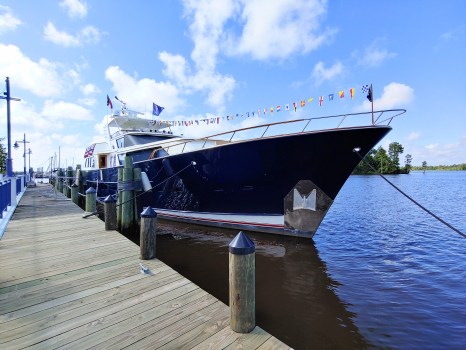 LEAVING TOWN: The Independence, docked just in front of the North Carolina Estuarium, is ready for its return trip to New York. Its captain, Washington resident Verdes Terblanche, said this week that the vessel will be back in port soon. (Karen Thiel) 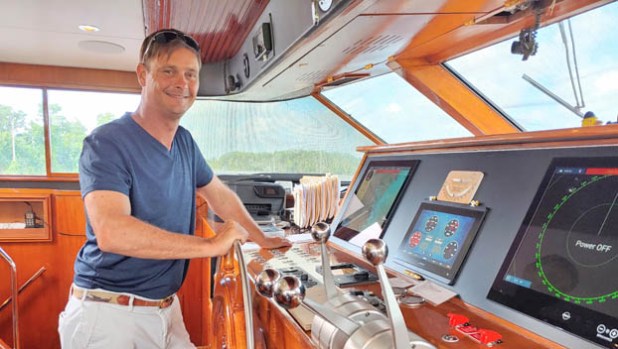 AT THE HELM: Ship captain Verdes Terblance has been a Washington resident for several years, arriving here from South Africa to follow his dreams. (Karen Thiel) 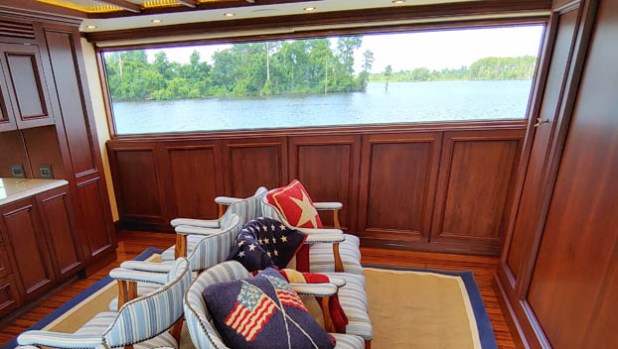 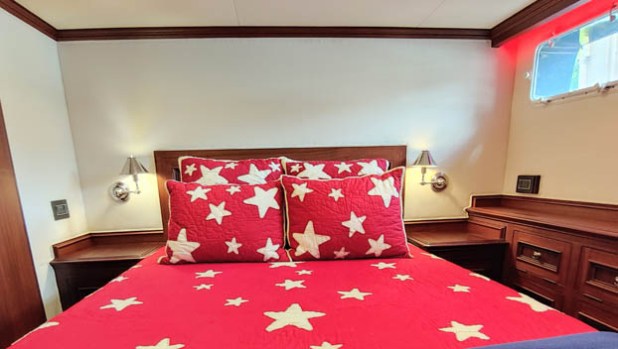 ELEGANT: The decor, shipwide, is as patriotic as the VIP stateroom, seen in this photo. (Karen Thiel) 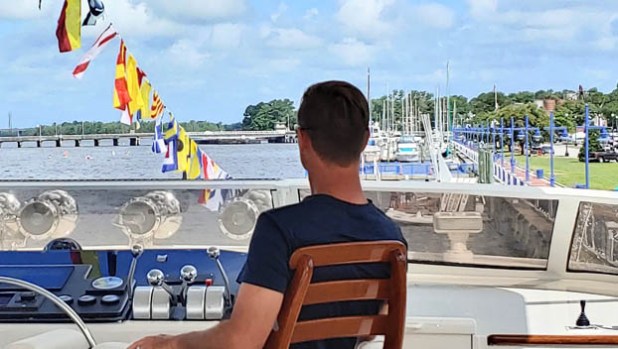 NICE VIEW: Ship captain Verdes Terblanche took a moment to appreciate his surroundings, as preparations for departure to New York were rapping up. He promised the ship and crew will be back soon. (Karen Thiel)

Tourists and locals around the Washington waterfront stopped in their tracks last February, as “The Independence” – a 114-foot yacht – approached the dock just in front of the North Carolina Estuarium. People jostled for a good view of the 30-minute spectacle as a crew docked the large watercraft.

The Independence has been drawing amazed and excited fans ever since.

Although it departed for New York on Tuesday, the ship will definitely be back, according to Verdes Terblanche, a Washington resident who manages yachts and other large boats through his company N.C. Marine Services. Included among those are the 85-foot yacht “Impromptu” and the 45-foot trawler “Shanon”, both also docked at Washington’s waterfront.

The Independence got a massive makeover while here because, according to Terblanche, “the décor was dated and the (new) owner likes his personal touch to be reflected on the vessel.” That began with a gutting of the yacht. The project was almost complete when Terblanche sounded the boat’s horn three times before leaving the dock as dawn broke over the Pamlico River.

The yacht, which is as long as a third of a football field, features a main salon with fireplace, twin televisions, wet bar, beverage cooler, and ice machine. The dining room is 12-by-15 feet with a generous window overlooking its surroundings. A master stateroom, VIP stateroom, twin stateroom, and guest stateroom are decorated in patriotic theme colors.

Custom touches include sea grass wallpaper as well as polished nickel on all handrails, sconces, light fixtures, and faucets, and the master stateroom’s hammered bathroom sink bowl. Teak-and-holly varnished plank floors glow quietly in public spaces and, as a nod to the ship’s past, a backlit original schematic of The Independence is mounted behind the ship’s helm. The vessel features twin turbo engine by Detroit Diesel and two 60-kilowatt John Deer generators, helped along by a fuel capacity of 8,000 gallons.

Before he returned to last minute departure preparations, Terblanche made a point of expressing thanks to dock staff and the town of Washington in general, then singled out city council member Mike Renn for “getting the right people to assist with this project.” Renn was modest about his part in the vessel’s visit, but enthusiastic about its effect on the town, noting an upward “economic and tourist impact, here and along our riverfront towns because boat owners don’t come to Washington to sit still. It allowed owners to see that we can handle that size boat, boosted the income of the city dock and local businesses, and put us on the map as a boating community.”